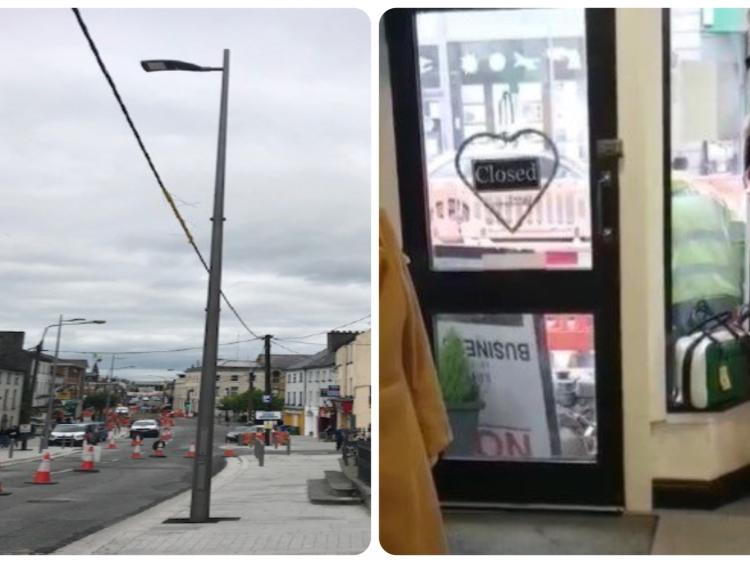 Offaly County Council has responded to fears expressed by multiple business owners in Tullamore that their outlets may close as a result of the ongoing and widespread disruption caused by streetscape works in the town.

The owners of boutique Park Avenue 23 on William Street in Tullamore, Regina McGreal and Kelli Vickers, were among those to raise concerns for their viability due to the disruptive works taking place right outside their door.

"Town re-energising sounds wonderful in theory, however, in reality, wider footpaths and smaller roads equal no parking which equals no shoppers and no shop," Regina said.

"It's simple maths. We are struggling. There is no point sugar-coating the problems that have been thrown at us," she added.

"I would like to reiterate that our business is open and we thank you all for your support to date and hopefully together we can get through the storm. Whilst the roadworks are a deterrent, I would ask you to shop local to keep us all on William street."

Cllr Ken Smollen has raised this issue at Municipal District level and has said he's been contacted by a number of businesses on William Street and elsewhere in the town feeling the effects of the road works which have been ongoing since the beginning of the year.

Responding to concerns on Friday, Tullamore District Engineer, John Connelly, said: "When works on the scale of this project are being carried out in the town centre disruption is inevitable. The Council recognised this from the outset and assigned an engineer, full time, liaising between property and business owners in the town and the contractor.

"We have tried in this way to keep business owners and property owners fully informed as the works moved through the town and to respond to their requests and concerns as far as possible. On a project of this scope, there will be inevitable snags and delays to be worked through.

"Notwithstanding this, the attention to detail and the quality of work of the contractor, David Walsh Civil Engineering, has, so far into the project, been to a very high standard. This is very important in the longer view given the significant investment of public funds through European, Government and Council funding streams.

Given an update on the timeline of the works, John added: "It is expected to have paving works on Columcille Street completed to the Harbour Street junction by the end of November and to have the south side of O'Connor Square and road surfacing of High Street and the square completed in early November.

"Works will then proceed into the north and pedestrianised side of the square with works on Columcille Street to be resumed in the new year," he added.

Offaly County Council has committed to having no works ongoing during the month of December with shops relying heavily on Christmas business.

"The project went through a lengthy consultation process during 2015 and 2016 giving many opportunities to discuss the issues and consider the viability of the project," John Connelly commented.

He explained the main aim of the project is "to enhance the town centre making it a more attractive place to live, to visit, and to do business."

He concluded: "The ongoing development on the Grand Canal Greenway into and through the town will link in with the street enhancement providing another attraction for Tullamore. It is expected that local businesses will benefit into the future from an increased footfall and that more businesses will be attracted to the town."