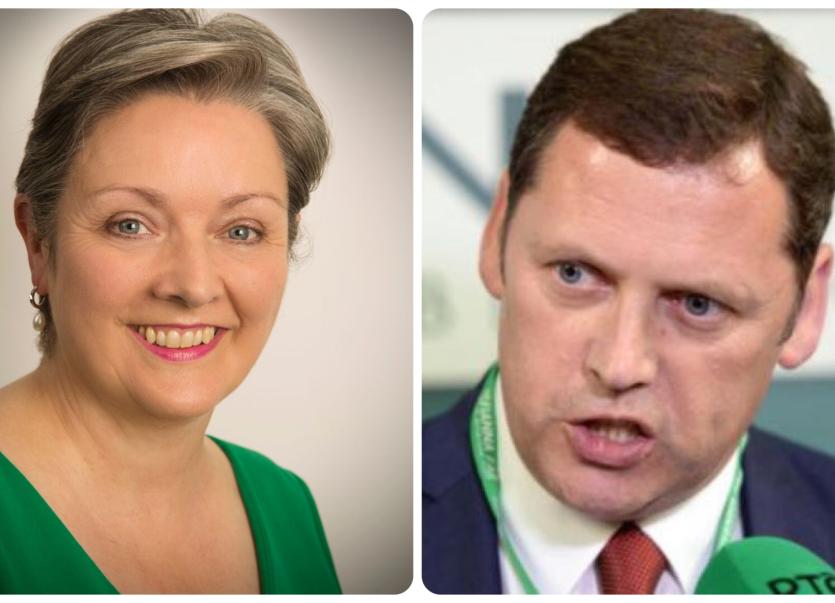 Offaly TDs from the country's two largest political parties have expressed differing views on the announcement on its future made by Bord na Mona on Wednesday evening.

Deputy Corcoran-Kennedy said: “I very much welcome the clarity from Bord na Móna on their intentions and I know this news will be a great relief to people and families all across Offaly and the midlands.

“I have been tirelessly raising the case of the Bord na Móna workers with my ministerial colleagues in Fine Gael.

“It has always been the Government’s priority is to assist Bord na Móna, its workers and the wider region as it moves away from fossil fuels and towards a more sustainable, resilient business model, that can secure jobs for the Midlands in the long-term.

“There will be redeployment opportunities for up to 200 workers, as well as the creation of up to 150 indirect construction jobs, as part of its strategy to move the company away from traditional peat-based activities.

“The redeployment opportunities have been created due to Bord na Móna’s accelerated programme of rehabilitation of bogs in the midlands.

Bord na Móna will also expand employment in its waste recycling and its new green business projects. It has also been confirmed that between 150 and 180 workers could apply to avail of the re-opened voluntary redundancy scheme, on top of 400 workers who have already left through the scheme.

“It is most welcome that the continuation of the voluntary redundancy scheme would accommodate those within Bord na Móna who wish to pursue new careers or educational opportunities," Marcella said

“It said it would also provide comprehensive training and supports for all involved in the transition.

“We all recognise the pivotal role Bord na Móna will play in the transition and welcome the update today on their Brown to Green Strategy and the progress being made to develop more sustainable business opportunities.

“Bord na Móna’s move to rehabilitate bogs will have a very positive impact, including reducing carbon emissions and increasing carbon sequestration over time.”

“Budget 2020 put a major focus on helping those most impacted as Ireland steps up our response to climate disruption. The Government will invest €31m in a number of key initiatives: €6 million for a Just Transition Fund for reskilling workers and community development; €5 million for bog restoration and rehabilitation on non-Bord na Móna bogs and €20 million to deliver a new model for group housing upgrades in the Midlands.

“The direct measures on bogs and retrofits have the capacity to deliver up to 500 new direct and indirect jobs for the Midlands.

“My colleague Minister Bruton will shortly bring forward proposals for a Just Transition Commissioner who will coordinate work between stakeholders in the region and central government.

“The Government’s just transition plan will include these measures and will look specifically at how best the State can assist the Midlands.”

“What is abundantly clear is that the commitment given by the Government that the transition in the midlands would be gradual is dead in the water. This Government is presiding over the accelerated pace of decarbonisation, which is happening much quicker than any investment in the region," he said.

“Notwithstanding the just transition fund which Fianna Fáil secured in the recent budget, there are still many outstanding questions which we are seeking answers to. It is only right that the configuration of how the transition fund is rolled out is decided by people on the ground and in the know.

“In securing the fund, I put forward a number of proposals on the roll-out of funding and it remains to be seen if the Minster will adopt them. It’s important that people are aware that this fund was not created exclusively for Bord na Móna. It is for the wider region, for the local economies who will undoubtedly suffer from the closures.

“Minister Bruton has said that the future of Bord Na Móna workers is a priority for his Government – completely ignoring the fact that many have already lost their livelihoods and are without stable alternatives.

“It’s completely disingenuous given the fact that I asked him over a year ago to seek inclusion of the midlands in EU supports and the Platform for Coal and Other Carbon-Intensive Regions in Transition – something he has only gotten around to now meaning we are already a year behind.

“He also needs to come clean on whether or not he will pursue a new application for Shannonbridge to burn peat past 2020 until 2027 while it transitioned to biomass. This was his Government’s own timeline, it is up to them to challenge the refusal of planning permission,” he concluded.