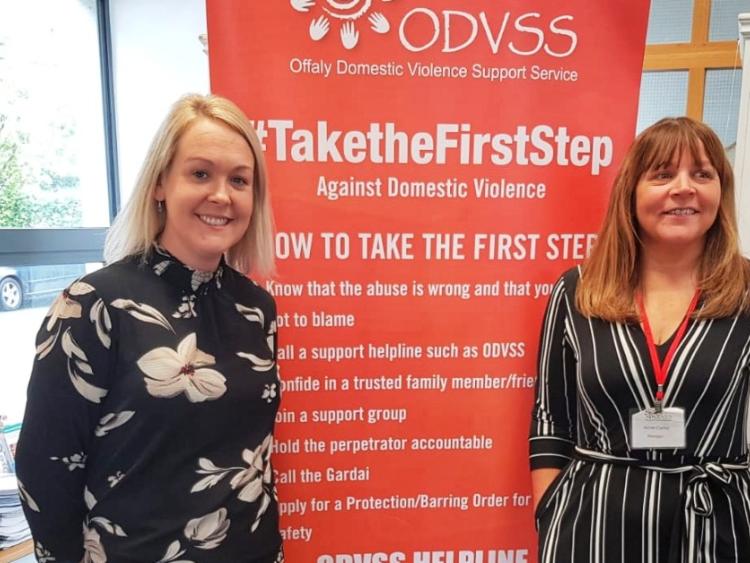 Cllr Clare Claffey with Anne Clarke of Offaly Domestic Violence Support Service at the launch of the new publication “Domestic Violence and the Workplace: Information for Employers and Employees”

Social Democrats Birr councillor Clare Claffey has described the lack of emergency domestic violence accommodation in Offaly and the entire midlands region as a “downright disgrace."

Cllr Claffey’s party obtained official figures from Tusla, the Child and Family Agency, which show that counties Offaly, Laois, Leitrim, Longford, Monaghan, Cavan and Roscommon, have between them, no refuge places for families that have experienced domestic violence.

Speaking at the launch of the Offaly Domestic Violence Support Service's new publication: 'Domestic Violence and the Workplace: Information for Employers and Employees' on Friday, October 4 in Tullamore Library, Cllr Claffey said:

“Figures supplied by Tusla to Social Democrats’ co-leader Róisín Shortall TD show that Offaly and the entire midlands region is a total black spot when it comes to safe shelters for families who have to leave their homes due to domestic violence.

"There seems to be no rhyme or reason why victims of domestic violence in Offaly and neighbouring counties have no local access at all to specialist emergency accommodation.

"This means that a domestic violence victim in Offaly in urgent need of shelter would potentially have to travel hundreds of miles to find safe accommodation. Even then, it may well be a case of no room at the inn, because the Tusla figures show that there are only four such places in county Tipperary, with six in Galway, four in Kildare and four in Tipperary.”

She continued: “The Istanbul Convention on preventing and combating violence against women and domestic violence – which was ratified by the Irish government last March, states that the provision for families seeking refuge from domestic violence 1 family accommodation unit per 10,000 per population.

"With a population of 58,000, that means that we should have a minimum of 6 units available – instead we have none. This can surely only work as a barrier to people in situations of sexual or gender-based violence from seeking the supports and services they need.”

"It is the obligation of the state to fully address it in all its forms and to take measures to prevent violence against women, protect its victims and prosecute the perpetrators.

"I understand that Offaly Domestic Violence Support Service are planning a feasibility study to examine the best approach for accommodation for victims of abuse leaving their home. I know that they hope to engage all stakeholders in this feasibility study, and I look forward to working with ODVSS in seeking funding for this important research."