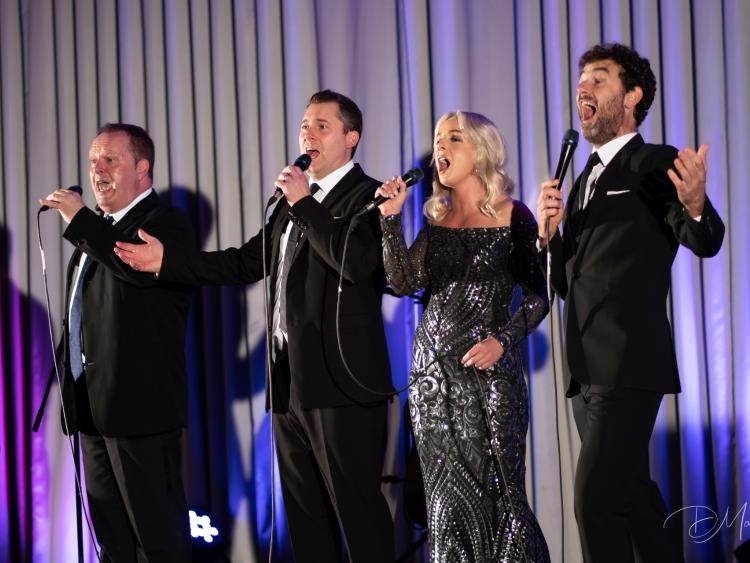 Offaly singer shines on stage with the Celtic Tenors

In what she described beforehand as being a "pinch-me moment" to even just think about, Offaly soprano Yvonne O'Toole dazzled during a spectacular special guest appearance with the world-famous Celtic Tenors in the Tullamore Court Hotel on Sunday night last.

Just a week away from her own solo concert, An Evening of Elegance & Enchantment in Charleville Castle next Saturday (October 12), the Birr woman joined tenors Matthew Gilsenan, James Nelson, and Daryl Simpson for two stunning numbers, including a spine-tingling grand finale, Time To Say Goodbye, which earned the fab foursome a richly deserved standing ovation.

Yvonne also treated the audience to two beautiful solo pieces, one of which was the iconic Think Of Me from Phantom of the Opera.

For Yvonne, the opportunity to not only share a stage, but also to perform alongside such international stars, was slightly nerve-wracking but wholly enjoyable, as she explained:

"I was definitely a little bit nervous now, I won't lie, everybody knows who The Celtic Tenors are, they're huge. So it was definitely kinda crazy - in a very good way - to think I was going to be performing with them.

"But they were so, so nice to me. The three lads themselves, and Brian, their musical director, and their sound-engineer Kevin, and their manager, Celestine, every one of them. They actually made me feel like we'd been doing shows together for years, not that it was our first time ever.

"I loved every minute of it, and I'm ready to do it all again. I called it a pinch-me moment, but I think I can call it a bucket-list moment now, because that was definitely a dream come true for me."

Accompanied by harpist Elaine Hogan and pianist Dr. Michael O' Brien, Yvonne will host An Evening of Elegance & Enchantment, a unique fundraising event for the castle next weekend.

"I've been dreaming of my own concert for years, maybe ten at least, maybe more. It felt so exciting when we finally started to plan it earlier this year, and then seeing all the pieces start to fall into place one-by-one as we went along. And now we're nearly there, I can't believe it. And it feels so unreal to think that it's only a few days away. I can't wait," she said.

The event takes place in Charleville Castle on Saturday, October 12, with an official welcome of a 'Tully & Tonic' cocktail for every guest on arrival. Doors open at 7.30pm and the concert begins at 8pm. Tickets are just €15 and are available from www.eventbrite.ie, and from TRAX in the Bridge Centre, Tullamore. For more info on Yvonne, check out her official website, www.yvonneotoole.com.