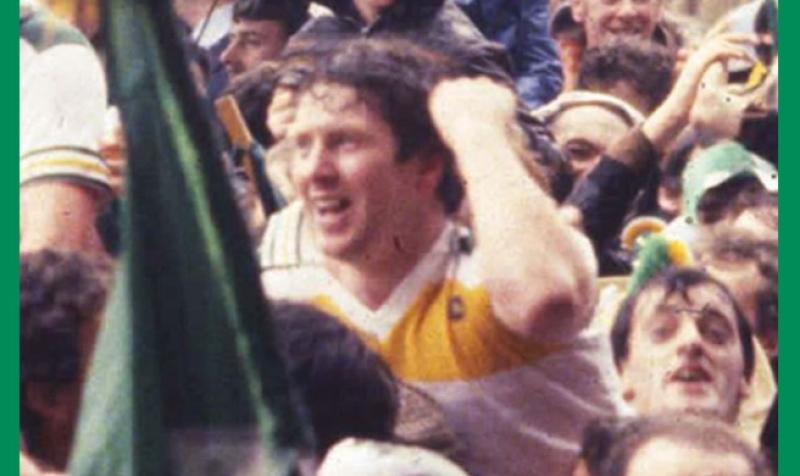 Nostalgia will be thick in the air on Friday night next, October 11, as ‘About That Goal,’ the official autobiography of Offaly’s All Ireland goal hero Seamus Darby is launched in the Bridge House, Tullamore.

The Offaly star, who came on with seven minutes left in the 1982 All Ireland final as Kerry sought to win five-in-a-row scored arguably the most famous goal ever in the history of the GAA on that occasion.

Darby was 31 when fame was thrust upon him after the sensational scored which deprived Mick O’Dwyer’s Kerry of the five-in-a-row that Dublin achieved last month.

On hand to do the official launch will be the skipper of that side, Richie Connor, while a host of star Offaly names from the 70s and 80s are expected to be in attendance on the evening.

“Over the years thousands of people – all well-meaning - have asked me if the goal changed my circumstances. I don’t know for sure what path my life would have gone down if September 19, 1982, hadn’t happened the way it did, but I’d like to think that I haven’t changed as a person because of it. And that’s the most important thing,” Darby said this week.

Now 68, what is often overlooked in the Seamus Darby story is the fact that he had won All Ireland medals with Offaly in the early 70s before he undertook his famous cameo in ’82.

“I was an unused sub in 71 when Offaly won for the first time but I played in the ’72 replay against Kerry when Paddy Fenning’s goal sealed the two-in-a-row for us.

“I played until ’76. That year I was captain of Offaly but was taken off against Meath in the Leinster championship. I was in my mid-twenties but I was out in the cold until ’82 after that.”

The former Rhode star explained that he always felt that despite the absence from the squad that he would come back in and play a part.

“I don’t know what it was – just a feeling deep inside me that said there was an unfinished chapter to my Offaly career. In the end, it was a lucky break because the manager Eugene McGee (RIP) attended an Offaly club championship match Rhode played against Daingean.

"It was a wet old day and we were three points down when I caught a ball and scored a late goal. I’m told it was on the strength of that score that I was brought back into the panel.”

After turning in a man of the match performance where he scored 1-3 against Dublin in the Leinster Final, he pulled his hamstring and missed the All Ireland semi-final win over Offaly – a game that his replacement, Johnny Mooney starred in.

“I knew the best I could hope for after that was to come on as a sub against Kerry but when it got so late, I thought my chance was gone.

"Then Eugene called me and told me to hang in around the Kerry goalmouth. I knew the way the game was balanced that Offaly would need a goal. I got one kick of the ball and that turned out to be the winning kick.”

And what about the push? “The funny thing is that I have become great friends with my marker of that day – Tommy Doyle. When we meet up, we talk about everything except the goal. Tommy has never used an excuse over the incident and all I can say is there was contact and sometimes a ref will blow for a free and sometimes he won’t.

"That day PJ McGrath, the Mayo ref, let it go and naturally I think it was the right decision. But I respect anyone who believes it should have been a free out.”

As he looks back over the 37 years since that score, Seamus has one major regret. “If I was to do it all over again, I would have retired from inter-county football that night. Instead, I stayed on for two more years when Dublin beat us in the Leinster Final in ’83 and the Leinster semi-final the following year.

“I was taken off in that game and the truth is I shouldn’t have been picked. Matt Connor, the greatest player I’ve played with, said that Offaly were trying to win the All Ireland for so many years that we lost our hunger after ’82. And I think he was spot on with that analysis.”

One of the last legacies from that match was the bond forged between the two teams down the years. “We go down to Kerry functions and they come up to ours. In ’92 – 10 years after that game - we all went down to play in a charity match and we got an amazing reception from the Kerry people. That’s the best currency the GAA gives us, friendships,” he declared.

After spending over 15 years working and living in England, Seamus bought a pub in Toomevara, Co Tipperary and has lived there since the mid-noughties. He still is an avid GAA fan, is a past player’s representative on the GPA and likes to get to as many games as possible both in his native Offaly and in Croke Park.

Seamus is looking forward to the gathering of the Faithful in the Bridge House next Friday, particularly after surviving a car crash this summer.

“I’ve come to realise that our time here is precious and I can’t wait to catch up with the GAA people that have enriched my life on and off the field,” he added.

About That Goal - The Official Autobiography Of Seamus Darby – written by PJ Cunningham is published by Ballpoint Press and will be launched by Richie Connor on Friday, Oct 11 in Bridge House at 9pm.