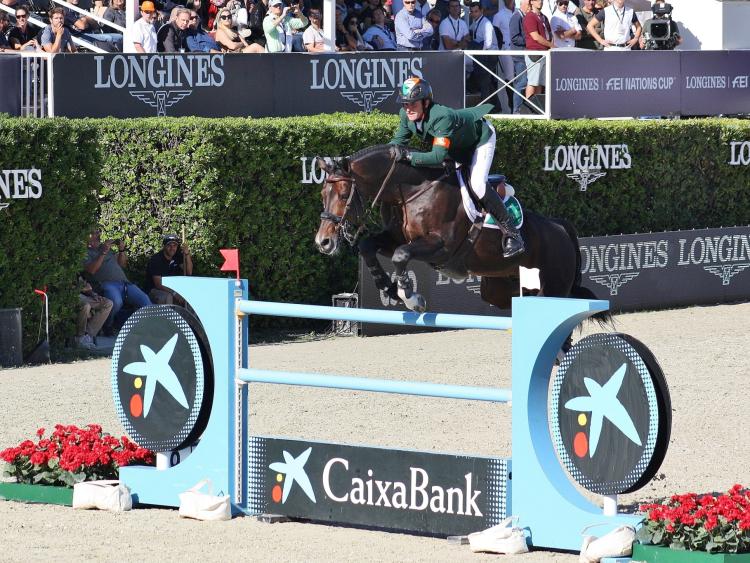 Darragh Kenny and Balou du Reventon on their way to a brilliant clear round at the Longines FEI Nations Cup Finals in Barcelona (Photo: Sonya Hennessy)

Offaly's Darragh Kenny is a key part of Rodrigo Pessoa’s Irish Show Jumping and along with Peter Moloney, Paul O’Shea, Darragh Kenny and Cian O’Connor, has made it though to Sunday’s Longines FEI Nations Cup World Final following a strong performance in the opening qualifying competition at Barcelona in Spain.

On board Balou du Reventon, Darragh jumped a superb clear round with the pressure on to keep Ireland inside the all important top eight.

With just the top eight of the 18 teams that started the competition making it through to the final, this was always going to be a tough afternoon of sport and in the end Ireland secured an impressive fifth place finish to safely move forward to Sunday’s Grand Final which, along with an Olympic qualifying spot, has €1.25 million in prize money up for grabs.

Waterford’s Peter Moloney got the Irish side underway with Chianti’s Champion, owned by Team Harmony, and they finished with one fence down and a time fault. Limerick’s Paul O’Shea with the Machu Picchu Partners-owned Skara Glen’s Machu Picchu looked to be heading for a clear round when second to go, however the second last fence fell to the floor and they also picked up a time fault to record the same score as Peter Moloney.

With pressure beginning to mount, Offaly’s Darragh Kenny with the Ann Thompson-owned Balou du Reventon delivered a superb clear round to push Ireland up the leaderboard. As poles continued to fall for many of the top teams, Ireland had secured a place in the final before anchor rider Cian O’Connor entered the arena with the Ronnoco Jump-owned PSG Final, with Ireland finishing the competition on a final score of 10 faults.

Irish team manager Rodrigo Pessoa was delighted to make it through to the final, but knows there is still plenty of work to do to complete Ireland’s main goal:

“We did our job today and have made it through to the final. We were pushed all the way by some strong teams, we had some good rounds today and now we have to finish the task and try to take the Olympic place on Sunday,” he said.

Sunday’s battle for the one final Olympic qualification place on offer in Barcelona will now be between Ireland, Italy and Colombia, while France, Belgium, Sweden, Switzerland and Germany will also take part in the grand final. Several top teams, including Britain, USA and The Netherlands missed out on a place in the final and they will be among 10 teams who go forward to Saturday’s Challenge Cup Final.

Crucially all teams will start Sunday’s final on a zero score meaning it’s all to play for in what promises to a be a thrilling Longines FEI Nations Cup Final in Barcelona.