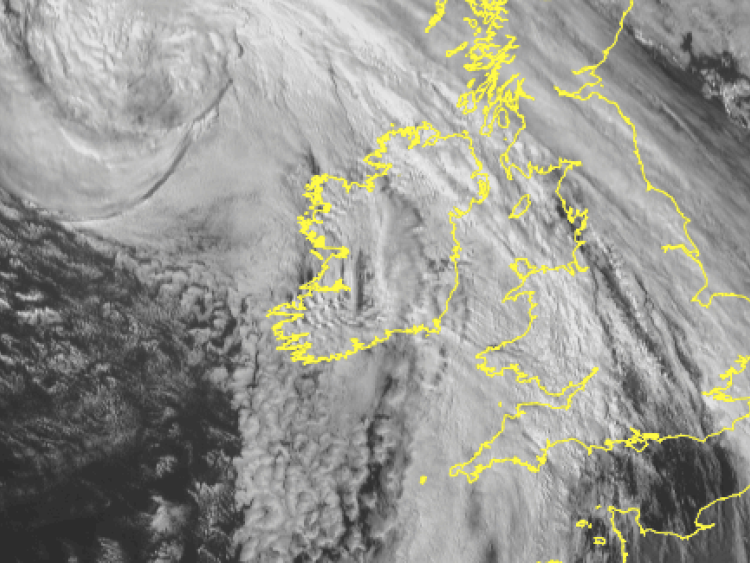 Met Eireann has posted a short video on Twitter showing the latest video of Storm Lorenzo as it approaches the north-west coast of Ireland.

1/2 Windy with scattered outbreaks of rain this evening. Strong to gale force S to SW winds with some severe gusts in coastal areas. pic.twitter.com/g7bdrPY6Cg

In its most recent update, Met Eireann is warning that it will be windy with scattered outbreaks of rain this evening. Strong to gale force South to South West winds with some severe gusts in coastal areas.

It is also warning that it will continue to be very windy tonight in counties in the west ans south with some further damaging gusts for a time, combined with very high seas. Winds will ease over northern and eastern parts. Rain overnight also, with some very heavy falls in parts of north Connacht and Ulster with a risk of spot flooding.

There is a Status Orange Wind Warning for Galway, Mayo, Clare, Kerry and Limerick. Southwesterly winds veering westerly will reach mean speeds 65 to 80km/h with gusts generally of 100 to 130km/h, higher in some coastal regions. Storm surges will produce coastal flooding and damage.That warning is in place from 6pm until 6am on Friday

There is a Status Yellow Wind warning for Leitrim and Sligo for winds of mean speeds of 50 to 65km/h with gusts of 90 to 100km/h. That is valid until 6am on Friday.

There is a Status Yellow Rainfall warning for Connacht, Leinster, Cavan, Monaghan and Donegal. There will be spells of heavy rain at times today and tonight will result in some flooding. That warning is in place until 6am.

A Status Yellow Wind Warning for Wexford, Cork, Tipperary and Waterford has been lifted. It was due to take effect at 6pm.