When Hurricane Lorenzo will impact Ireland according to Met Eireann 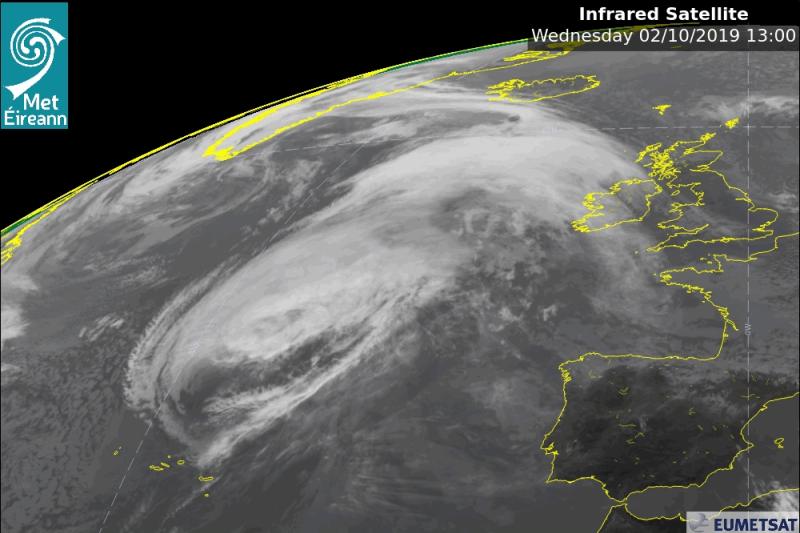 According to Met Eireann, the effects of Storm Lorenzo will begin to be felt across Ireland from midday Thursday, peaking late Thursday evening and Thursday night, easing Friday morning.

A Status Orange Wind Warning is in place for Galway, Mayo, Clare, Cork, Kerry and Limerick. Southwesterly winds veering westerly will reach mean speeds 65 to 80km/h with gusts generally of 100 to 130km/h, higher in coastal regions.
Storm surges will produce coastal flooding and damage. It is valid from 6pm on Thursday until 3am on Friday.

A Status Yellow Wind Warning is also in place for Ireland. Southeasterly winds later veering southwesterly will reach mean speeds 50 to 65km/h with gusts to 100km/h resulting in some disruptive impacts. It is valid from 9am on Thursday until 6am on Friday.

Lorenzo maintains hurricane status with maximum sustained winds of 155 km/h and minimum central pressure of 960hPa, present movement is NE at 65km/h. Lorenzo will undergo extra-tropical transition within the next 24 hours as it engages with the polar jet-stream.

Lorenzo will accelerate north-eastwards across the mid-Atlantic during Wednesday, engaging with the polar jet-stream on Wednesday night approximately 1000 kilometres southwest of Ireland.

As Lorenzo passes over colder waters and engages with the polar Jetstream it will lose its tropical characteristics and no longer be a hurricane, but it will be a dangerous Atlantic Storm.

Storm Lorenzo will continue to accelerate north-eastwards, with its centre approaching the west of Ireland during Thursday. Lorenzo will then likely make a right turn, tracking across Ireland on Thursday night whilst it begins to gradually weaken.

The exact track Lorenzo will take over Ireland is still subject to change. The most severe winds associated with Lorenzo are likely in Atlantic coastal parts on the southern flank of the storm, however strong winds are possible in all areas.