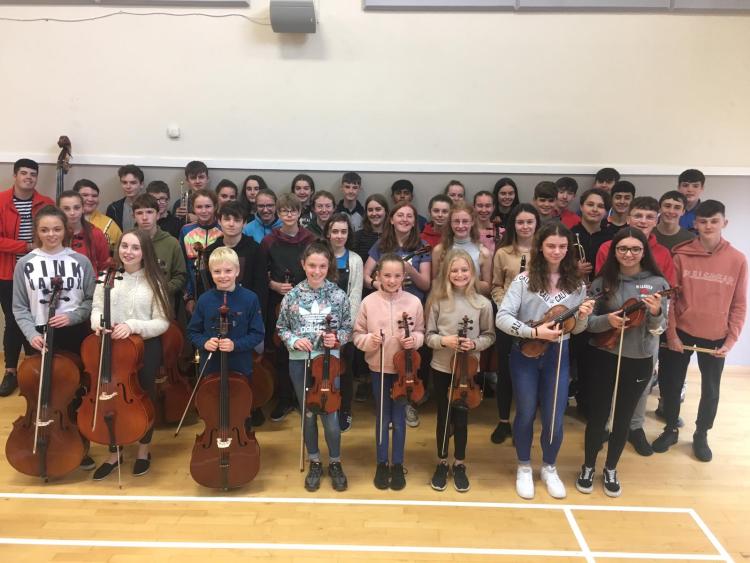 The Irish Midland Youth Orchestra (IMYO) held a most successful series of masterclasses over the weekend of September 14 and 15.

The event took place in Charleville National and Charleville Centre, Tullamore. Supported by Offaly Co. Co Arts Office, over 60 young musicians were fortunate to be provided with classes given by top-class tutors/performers in their respective disciplines, the majority of musicians coming from Offaly.

Most orchestral instruments were catered for from strings to wind, brass and percussion.

The IMYO was formed in 2006 after a collaborative project involving different orchestras from around the Midlands region of Ireland. It aims to promote group performance for young musicians aged 12 to 21 in an orchestral setting. By participating in the orchestra an individual’s musical skills, self-esteem, social awareness, confidence and ability to work as part of a team are all developed as is their leadership skills.

Two years ago, a junior section, now called Primo Orchestra, was formed to facilitate young people who may not be ready for the senior orchestra to make that jump.

The orchestra is very fortunate to have as a director the calibre of Ross Bader. Ross has relocated to Ireland from the USA. He began his career as a music teacher and orchestra director at Dobyns-Bennett High School in Kingsport, Tennessee. Under his directorship, his orchestra performed in Nashville, Toronto, Carnegie Hall, New York, St. Patrick’s Cathedral, Dublin and won many awards. Ross also served as conductor of the Symphony of the Mountain Youth Orchestra in Kingsport, USA.

He also has adjudicated at many regional orchestra festivals in the US. Since taking the reins at the Midlands Youth Orchestra the Orchestra has collaborated with St. Mary’s School, Edenderry for a wonderful evening of music, has performed with The Academy of Music Choir under the directorship of Ciaran Brady, have performed at All Saints, Mullingar. A very successful Music in May concert in collaboration with Scoil Mhuire, Tullamore was held last year – this concert was supported by Offaly Co. Co.

This year some exciting new events are planned throughout the county.

The standard of musicianship in the orchestra is high and they strive to keep it that way – that is why, in addition to our monthly practice sessions, held in Tullamore, we hold a series of masterclasses for our members. The group wish to acknowledge the support of Offaly Co Co Arts Office without which last weekend could not have happened.