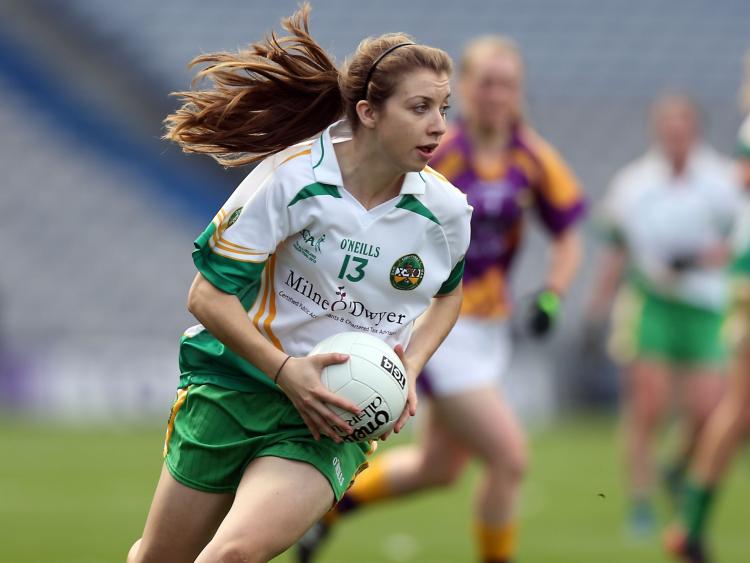 Edenderry GAA made history this week with the appointment of a full-time Games Promotion Officer.

Offaly and St Rynagh's dual star Mairead Daly commenced work in the role this week. Edenderry are the first club in Offaly to appoint a GPO as they aim to further increase playing numbers.

As GPO, Mairead is responsible for the implementation of a project or set of projects as outlined in GAA Games Development Policy. She will work as part of a team, in conjunction with other club personnel, to deliver set goals and objectives for all GAA sports.

Club Chairman David Farrell said: "The appointment is a major undertaking on behalf of the club and requires a significant financial undertaking. However, with the support of part funding from Leinster GAA and the continued backing of our wider membership we are confident we will deliver the necessary investment."

"Dublin GAA has witnessed the successful outcome of their own clubs investment in GPO's over many years. In recent years the GPO programme has been extended to counties experiencing rapid population growth, Kildare, Meath, Wicklow and others. It was for this reason that Edenderry sought inclusion in this project."

"The rapid growth of population has given Edenderry a primary school population of over 1,300 children. Edenderry GAA wish to expose as many of those children to Gaelic Games as possible in order to promote our games but also to encourage healthy lifestyles."

"Our ambition is that Mairead will work with the children in school but also be in the club some evenings and weekends to continue to coach the children. We believe the appointment will allow us to offer a wider range of activities that will extend our playing season and offer a greater variety of options for children and parents, including a series of Camps at Halloween & Easter."

The current Offaly senior ladies captain and Offaly ladies footballer of the decade 2006-2016 is a graduate of Waterford IT where she won the Waterford IT sports star of the year in 2017 and a Higher Education college All Star in 2017. She has been named on the Lidl Division 3 team of the league on four separate occasions in 2013, 2016, 2017 and 2018 as well as winning three senior county titles in a row with her native St Rynagh's.

The appointment is a huge boost for the Reds as Mairead is just as skilful with a hurley as she is with her feet and this will provide huge benefits as they continue to strive to improve coaching standards across the board.

On Wednesday, September 11, Mairead visited the five primary schools in Edenderry where she will spend between 20-25 hours a week coaching hurling, camogie and football to the youngsters.

"I’m very excited to be the first-ever club GPO in Offaly. Edenderry is a very progressive and driven club which is brilliant, this was obvious from the day I met with the club's representatives. Through working with Edenderry GAA I’m confident that we will have a mutually beneficial relationship, whereby we are both gaining and sharing valuable experience and knowledge in this industry. I’m hoping to see Edenderry blossom as a highly competitive dual club, as well as increasing the amount of players representing the club," Mairead said.

"I’ve played football and camogie for St Rynaghs since I was about six years old. I loved it then and I still do! I was lucky growing up as I had great family support and enthusiastic coaches throughout my childhood. They really emphasised the importance of fun and expressing yourself through sport. I started playing for my county at U12 level, and I’ve had the honour of captaining the Offaly Ladies team for the past two years."

The 24-year-old has enjoyed a glittering career in both codes having won three U14, five U16, five minor and three senior football titles in her illustrious career to date while also collecting an U14, two U16, two junior, two senior and one Leinster camogie medal.

She made her Offaly debut in 2011 aged 16 and has a wealth of experience as both a player and a coach.

"The most enjoyable part of coaching for me is watching players develop in both their personal life and their sporting life. The transferrable skills you learn in sport can have a huge impact on your personal life. It’s important for me that the players I’m coaching come to the session smiling and leave the session smiling. In order to achieve that, I ensure my sessions are based around a competitive, but fun environment," Mairead added.

Daly credits Colm 'Gooch' Cooper (Kerry) and Henry Shefflin (Kilkenny) as her sporting idols while Clara Donnelly (Wexford) and Michaela Morkan (Offaly) are regarded as her toughest opponents but she has plenty of vivid memories of Edenderry throughout her playing career so far.

"Edenderry were one of our biggest rivals when I was growing up. One of my worst memories from playing against Edenderry was in my last year U16. They beat us by a couple of points and we didn’t expect it. We weren’t an arrogant team but for some reason, we were fairly confident we were going to win so that loss hurt a bit. It stopped us getting six U16 titles in a row. However, we did get our revenge in a few senior semi-finals a couple of years later so it wasn’t all bad memories."