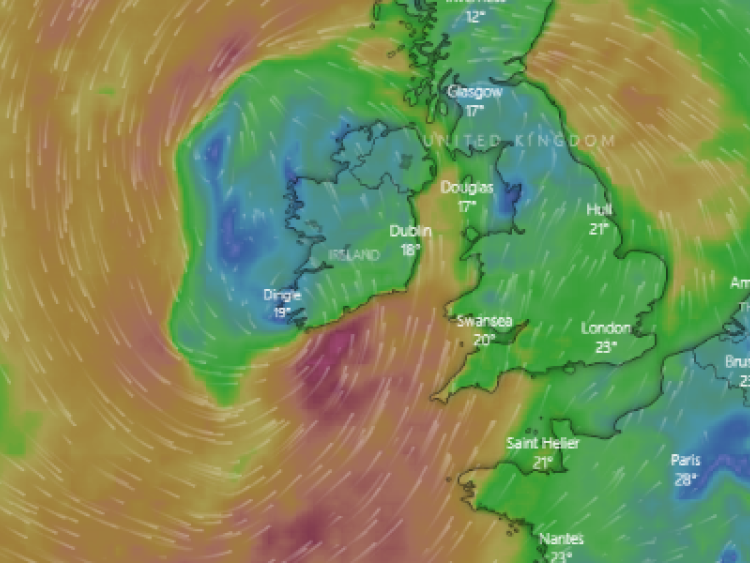 Numerous weather warnings are likely this coming week, with some really inclement weather expected through Thursday night and much of Friday, an Offaly weather forecaster has said.

Cathal Nolan from the Midland Weather Channel has warned that all areas are at risk of seeing some thunderstorms activity and very heavy rainfall during this period.

The meteorologist says Wednesday will remain mixed, especially during the morning, "though conditions will be much improved from Tuesday with the showers being less intense and more scattered. The heaviest of the showers will occur across Ulster, with good sunny spells elsewhere. Highs of between 19-22 degrees Celsius."

"Thursday will be the best day of the week, with all areas enjoying a predominantly dry day with some good sunny spells. Cloud will build, however, from the south during Thursday evening as a very active Atlantic weather system, originating from a tropical source, pushes northwards across the country."

"During Thursday night some intense downpours with embedded thunderstorms are likely across much of the country, with southern, central and eastern areas currently expected to see the heaviest downpours with a risk of flash flooding in some areas due to the volume of water expected to fall in such a short period. More updates will follow on this risk closer to the time," Cathal added.

"Feeling very humid and heavy on Friday as a deep low pressure for August sits directly across Ireland. A very unstable air mass will remain in place with a risk for some strong thunderstorms to develop during the afternoon and evening, with central, eastern and northern areas most at risk by then. A flooding risk remains in place due to the torrential nature of the showers which are expected to develop. Highest temperatures of between 20-23 degrees Celsius."

Keep up to date with the Midland Weather Channel on social media for further updates.

The warning is valid from 2pm to 9pm on Tuesday, August 6.