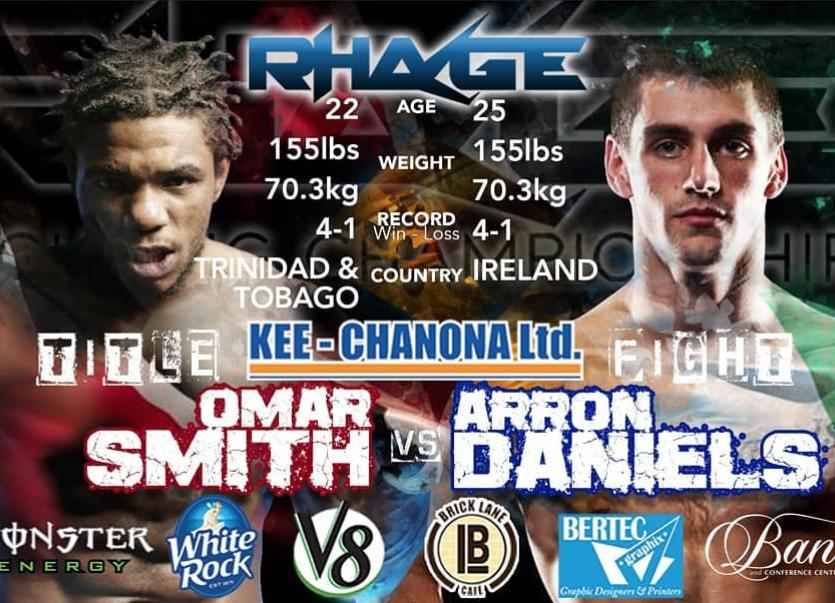 Edenderry based Arron Daniels, takes his MMA career to a new high tonight in Trinidad and Tobago in his Rhage Fighting Championship Title Bout.

The fight takes place in the Cascadia Conference Center in the island’s capital, Port of Spain. Arron will fight local MMA star, Omar Smith, in what looks to be a very well matched fight. Both fighters show similar stats, fighting at 155 lbs, Omar is 22 years old and Arron is 25, both with records of 4-1.

Arron is a personal trainer at Edenderry’s Velocity Academy and a former WAKO Kickboxing World Champion but in recent years has preferred to pursue a Mixed Martial Arts career.

Training at SBG Concorde under world renowned coach, John Kavanagh, Arron has been slowly building his profile and is very highly rated on the national circuit. Arron travels out with teammate Eoin McDonald who fights Randy Sooknarine also at 155 lbs with SBG’s Tommy Martin coaching and cornering both fighters.

The Ticknevin native is conscious of fighting Omar Smith in his own backyard and will be trying to finish the fight without having to resort to the judges scorecards. All Arron’s supporters in Edenderry, Carbury, SBG and Team Hurricane Kickboxing will be shouting for him on tonight.