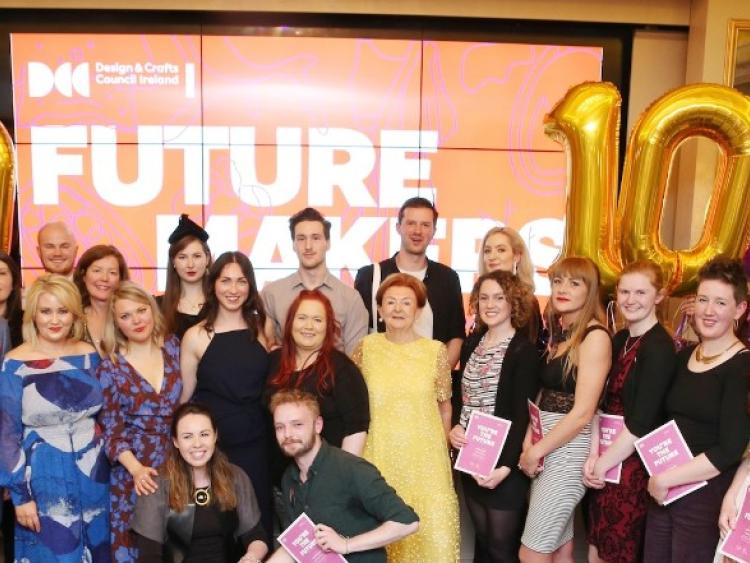 An Offaly womenswear designer has been named as one of 23 designers and craftspeople recognised by the Design & Crafts Council of Ireland (DCCoI) recently.

The 23 students and emerging designers and craftspeople have received awards and supports totalling €25,000 through the organisation’s Future Makers programme.

The announcement took place at an awards ceremony in The Westbury, Dublin which was officially opened by fashion designer, educator and former Future Makers winner, Natalie B. Coleman. The certificates were presented to the recipients on the night by DCCoI Chair Breege O’Donoghue.

The judges said: "Sinead’s work is tackling the contentious subject of body image. There is a bravery to her practice. Hers is an important message told through a combination of body sculpture, performance and fashion."

Sinead is originally from Tullamore and was represented on the night by her mother Adele O'Dwyer who picked up her prize on her behalf.

Future Makers 2019 received the highest number of entries to date with 214 applications submitted and assessed through a formal judging process. Entries for 2019 were evaluated by a panel of national and international judges over two stages. The first round was judged by Frances McDonald, Contemporary Design and Craft Consultant and Paula McCoy, Homeware Buyer at Arnotts who selected a longlist from the initial applications.

At the second round, a final group of 23 designers and makers were chosen to receive awards and supports by independent curator Brian Kennedy and fashion designer Alison Conneely. Demonstrating innovation and creativity as well as traditional and modern techniques, the 23 successful applicants come from a broad range of disciplines, from textile design to jewellery, ceramics to metal making, and from throughout the island of Ireland.

Future Makers judge Alison Conneely is a past winner having received the overall Future Makers Award in 2013. She is among many previous winners and recipients who have established and developed careers across a wide range of design specialities in the creative sector. These include fashion designers Pearl Reddington, Natalie B. Coleman, and Sorcha O’Raghallaigh; jewellers Genevieve Howard and Pierce Healy; leather artist Úna Burke; ceramicist Ann McBride; design studios Elements of Action and Superfolk; and furniture designers Cillian Ó Súilleabháin and Alan Meredith.

The RDS Craft Awards 2020 will be open to winners of DCCoI Future Makers Awards & Supports 2019. Five bursaries of €10,000 each will be awarded for the development of business and craft skills to those pursuing a professional career in the sector. The award can be spent on further education and training, research, development of new work, mentoring, purchase of equipment, studio improvements, website and residencies. See rds.ie/craft for information.