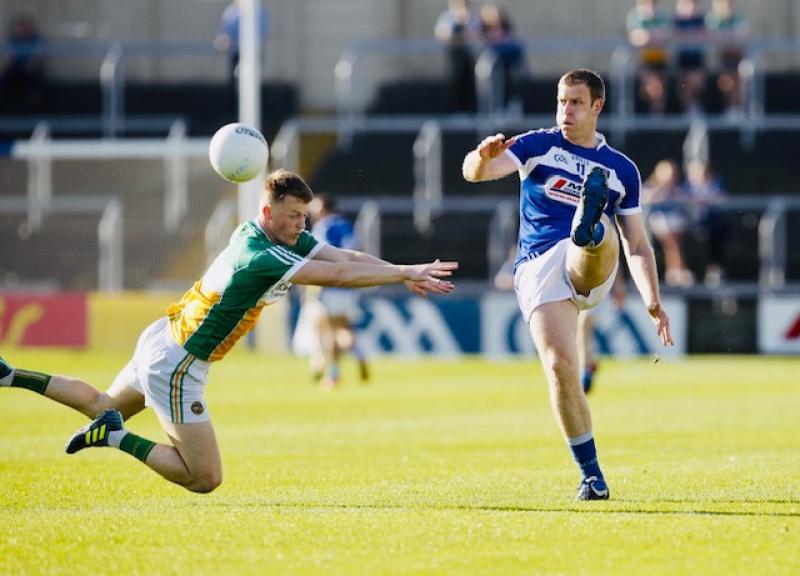 Donie Kingston gets this kick away for Laois against Offaly in Round 3 of the Qualifiers at O'Moore park. Photo: Alf Harvey

GAA fans from Laois and Offaly were less than impressed with Sunday evening's Sunday Game highlights show after the counties' fiercely contested and well-attended clash in Round 3 of the All-Ireland qualifiers on Saturday.

The game was delayed by ten minutes on Saturday due to the crowd numbers for the local derby, but the game did not receive the same attention as the other qualifier games on the weekly highlights show on Sunday.

After a hurling panel on the highlights show had poured over the Leinster and Munster finals, played and screened live in a more than five-hour long show on Sunday, a football panel delved into the qualifier action.

The highlights of the game were condensed into five minutes while fans fumed that the panellists failed to offer a single piece of analysis of the Offaly v Laois game on Sunday night.

They took to social media to vent their frustrations with the lob-sided coverage:

@RTEgaa @RTEsport @TheSundayGame ye are an absolute disgrace.... Ye spoke at high about the Tyrone v Kildare.. Mayo v Armagh and Westmeath v Clare games but not 1 minute of Laois v Offaly, shame on you!!!!

@RTEgaa can’t believe I stayed watching the @TheSundayGame until 11:30pm and got no analysis of Laois and Offaly game. If you can’t give the championship the respect it deserves give it to someone else who will

@TheSundayGame spends 2 hours analyzing every game this weekend except one - doesn't even give the Laois Offaly game 2 seconds of analysis. No respect!

All qualifier games from yesterday had an in depth post game analysis on Sunday Game tonight except Offaly vs Laois. Top class RTE, fantastic, A1, 10/10

Lengthy discussion about the amount of extra time in Mayo/Armagh and then no analysis of Laois and Offaly. Why must you hurt me Sunday Game? pic.twitter.com/F0bmYb9C3n

Great the way the panel spoke about all the football qualifiers, shooting, moves etc then when it came to @CLGLaois and @Offaly_GAA they spoke about the next round.... Cheers lads

Same old carry on with @TheSundayGame and @RTEgaa. Four football qualifiers on, all get proper analysis apart from the Laois vs Offaly game. Disappointed? Yes. Surprised? Not in the slightest. #laoisabu19 ⚪️

Typical #SundayGame, no analysis of Laois v Offaly game, let's talk about the draw instead

Wait up til 11.30pm to watch Laois vs Offaly and best and only analysis #thesundaygame can come up with is that Laois are now the only Div 3 team left in Championship. Not one word was said about the game itself, Offalys season to date or Laois chances next weekend ‍♂️

@RTEsport not one word of analysis on the Laois Offaly match. That is pretty pathetic.

I find it hugely hypocritical of the Sunday Game who continuously go on about Div 3 & 4 teams needing “encouragement”. They didn’t even bother doing an analysis on the Laois v Offaly game!!