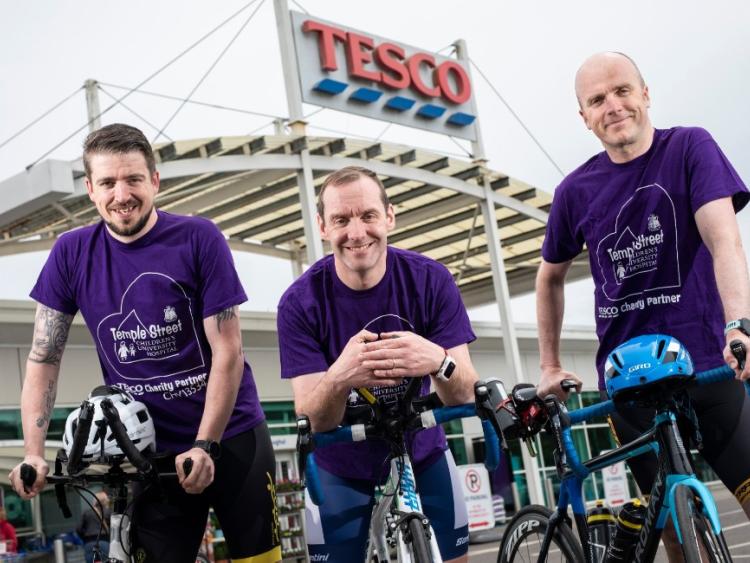 Tesco Ireland has announced its support for the inaugural Ironman Ireland Cork, taking place on Sunday, June 23, and the manager of an Offaly Tesco store is preparing to tackle the mammoth challenge in the picturesque seaside town of Youghal.

Edenderry store manager, Gerald Lynch, along with Roscommon store manager, Stephen Corrigan and Abbeyfeale store manager, Damien Morrison, are all partaking in this year’s challenge, with the hopes of raising much-needed funds in the process for Tesco’s charity partner, Temple Street.

To date, Tesco Ireland has fundraised over €4.3million for the hospital, helping it buy much needed life-saving equipment. Tesco colleagues across the country are aiming to raise €5 million in 5 years, before the end of 2019.

Shane Faherty, regional director, Tesco Ireland said, “We are thrilled to have three inspirational store managers training hard for this much anticipated challenge with IRONMAN Cork.  Our store teams and customers have rallied in support with much-needed donations being made to support our athletes as they prepare to raise vital funds for our charity partner Temple Street.”

The partnership will see Tesco Ireland support the first-ever IRONMAN Ireland Cork with a live activation area in Youghal town, to build excitement ahead of the monumental event. The event village will be open from 20th – 22nd June and will showcase the Tesco Airstream - cooking up Tesco’s finest* range to keep the athletes and their supporters sustained for the endurance event. To stay connected during the weekend Tesco Mobile charging units will be available for fans and participants as well as complimentary samples including sun cream and lots more fun for the families in attendance.

Athletes from 62 different countries will compete in Ireland’s first ever IRONMAN race. The race will get underway with a 3.8km swim with a rolling start from the golden and sandy Claycastle beach in Youghal Bay, with a two-lap 180km bike course lying in wait. Beginning in the centre of Youghal town, athletes will take on the challenge of climbing up the famous Windmill Hill twice, which undoubtedly will also become a spectator hotspot.

The athletes will then encounter a combination of flat country roads and rolling coastal roads with magnificent sea views of Youghal Bay, Ballycotton Island and Cork Harbour. This breath-taking course goes around County Cork, into the town of Midleton and will rise to a maximum elevation of 190m above the town, before a technical drop back into Youghal.

After tackling the bike course, the participants will embark on the 42km run course, the highlight of this new event. This will be a flat four-lap run course through the centre of the historical town of Youghal, taking in Youghal Harbour and the famous Clock Gate Tower. Athletes will run under the arch of the Clock Gate Tower in the centre of town during each lap before finally running under the iconic IRONMAN finishing arch at Green Park.

Each year Temple Street treats over 145,000 children from across the country and operates the busiest A&E department in Europe. For thousands of children, Temple Street is the only hospital in Ireland they can be treated in. Through the charity partner programme, Tesco colleagues and customers can help sick kids from all over Ireland get better and be real-life heroes to children attending the hospital.