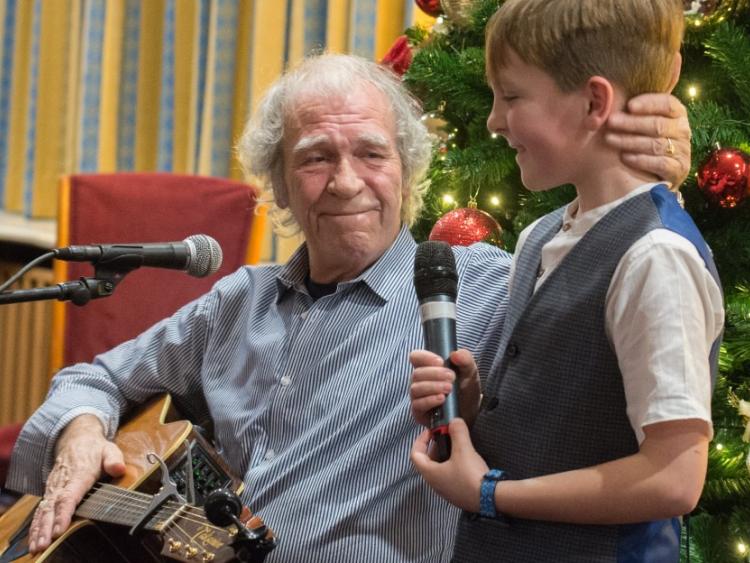 Finbar Furey congratulates Thomas Wrafter after their performance of 'I Remember You Singing This Song, Ma' in Leinster House last Christmas

The Wrafter Family Band from the midlands town of Kilbeggan have made it all the way to the final of this season's Realta Agus Gaolta talent contest on TG4, with the final due to be broadcast this coming Sunday evening, June 16.

Mum and dad, Noreen and Peter, with their three children, Conor, Thomas, and Aimee, were one of the two acts selected by the show's judges to progress from their semi-final two weeks ago.

In her comments about the Wrafters following their performance, one of the judges, broadcaster Sinead Ni Uallachain, remarked, "This family is what the series is about," also adding, "you're joyous, that's what stands out."

Sinead's fellow judge, the Sean-nos singer Irial Ó Ceallaigh, hailed the Wrafters for, "one of the strongest performances we have seen."

The show's third judge, Jim Lockhart of celtic-rock legends Horslips was also fulsome in his appreciation for the Kilbeggan five.

Speaking about whether or not he and the family feel pressure for the grand final, dad Peter said: "Not at all, not a bit of it. And I'll tell you why that is. Because what we'll be doing in the final is what we've done in every round of the show so far, and that's performing music together as a family, and that's something we love."

"And when you love what you're doing, you enjoy every minute of it. So no, there'll be no pressure on us. The whole show has been an experience to be enjoyed, to be honest, and the final will be no different in that regard. And great credit must go to everyone involved in Realta Agus Gaolta and Adare Productions for making it such an easy process to enjoy."

"There's an incredible amount of work that goes into putting a show like it together, there's so much stuff behind the scenes that has to be taken care of or nothing would ever make it onto our screens at all."

So while the Wrafters are preparing for Sunday's final in a quietly calm and confident way, that's not to say that they are taking anything for granted in terms of their own performance or the other contestants, as Peter explained.

"When you get to this stage of any contest, be it in music or sport or anything else, whoever is still in with a shout of winning is there on merit. And that's to be respected. And as we've seen throughout our time on the show this year, and indeed last year, there are some phenomenally talented families in the country."

"And this year, we're very honoured to be among the ones who have made it this far. The one thing that's always in your own destiny when you get up on any stage anywhere, is your own performance. You want to have everything right because you want not only to entertain your audience but to do so by doing yourself justice as a musician."

"So while we don't feel under any pressure for Sunday - because look, whatever happens on the night is what happens - that doesn't mean we won't be spending a few extra hours together in the sitting room between now and then, just to make sure we're ready. No-one is ever too good to practise a bit more."

Last December the Wrafters were invited to play support to Finbar Furey for a special Trocaire fundraiser in Leinster House. During his own performance that evening, Finbar invited little Thomas Wrafter to sing 'I Remember You Singing This Song, Ma' with him, which resulted in a standing ovation, viral coverage online and an invitation to repeat that performance when Finbar performed in Tullamore earlier this year. And there's a strong chance the Wrafters will perform this song in Sunday's final.

"Nothing is decided yet", advised Peter, "so we'll see. But the response to Thomas singing that particular song with Finbar has been amazing. For such a young lad, he's able to put so much emotion into it, and draw so much emotion out of a song that's really written from a far older person's perspective on life, and on time. We'll see. If we do go with that one, I think it'll pull at some heartstrings, though."

The Wrafter Family perform in the Grand Final of this season's Realta Agus Gaolta on TG4 next Sunday evening, June 16.