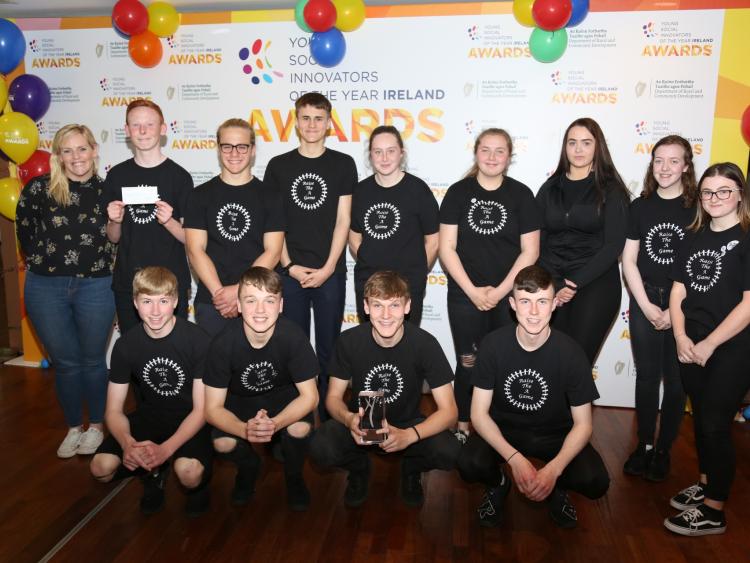 The school's Raise The A Game project aimed to promote inclusiveness in their school and local community for those who suffer from autism and scooped the 'Fun-Raising Award' this week.

Some of the team members have families directly affected by autism and they were passionate about learning from professionals and organisations about they could better support their peers and make their community more friendly for autistic members of the community.

They created initiatives in shops to have autism-friendly shopping days as well as for students in the ASD Unit to be introduced to the world of work. They encouraged sports stars to support their Raise the A Game campaign and have created a Raise the A Game flag. The team also fundraised for a local autism charity as well as for the upgrade the ASD Unit in the school.

Elsewhere, a project on consent scooped the gold prize in this year’s Young Social Innovators of the Year Ireland Awards. The project, Let’s Talk About Consent, from Bush Post Primary School in Riverstown, Dundalk, Co Louth explores the issue of consent and aims to educate young people about what consent is and isn't in a very accessible way.

Now in its 17th year, Young Social Innovators challenges young people to come up with and implement creative solutions to some of the most pressing issues facing them, their communities and wider Irish society.

Some 600 teenagers from more than 30 second-level schools around the country gathered at Croke Park on Wednesday, May 15 for this year’s awards ceremony, where the winners of the nine challenge categories, such as Making our World: Safer; Poverty Free; Fair and Just; Healthier, along with the winners of the Global Citizens Awards, the Social Media Award and others were also announced.

Commenting, Young Social Innovators chief executive, Rachel Collier said: “The standard of projects this year was exceptionally high and we want to congratulate the teams in the shortlisted projects. Making a positive impact in your community, and across wider society, is at the core of what Young Social Innovators is all about, so the interest and engagement by the young people in improving their communities was wonderful to see. We look forward to another highly successful awards next year. We wish to thank the schools and teachers for their support.”

Judges’ Chair, Donal O’Callaghan added: “Our job this year as judges was a hard one. The gold winner is an exceptional project addressing a major issue of concern to both young people and to everyone in society. We congratulate all award winners, all the teams who took part and all those who participated in this engaging and inspiring programme throughout the year.”