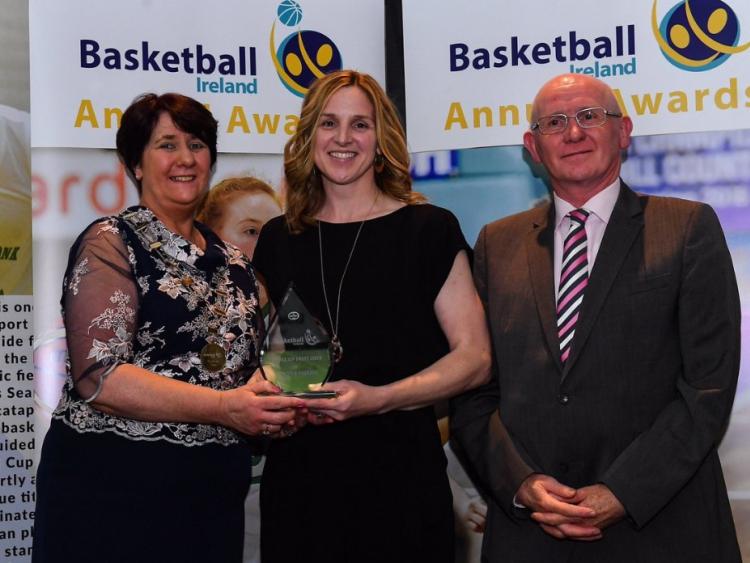 Offaly's Susan Moran made history at the weekend as she became one of the first women to be inducted into the Basketball Ireland Hall of Fame.

Croke Park was the place to be on Saturday, May 11, as the 2018/19 Basketball Ireland Annual Awards and Hall of Fame ceremony was held at the iconic stadium.

With award winners from across the game and across the players, coaches, officials, schools and leagues, the event also acknowledged four President’s Lifetime Achievement awards for Andrew Drumm, Joe Byrne (RIP), Joey Boylan and Donal O’Connor.

Siobhán and Susan both had the unique honour of being the first two women inducted into the Basketball Ireland Hall of Fame, while Kelvin Troy was the first American to be inducted.

Speaking afterwards, the Offaly woman was overwhelmed by the honour and the support on the day, which saw all inductees receive a standing ovation for their contribution to Irish basketball over the course of their careers.

“It’s so special, I’m so honoured,” said Susan Moran afterwards. “No matter where I go, I’m so proud to be Irish and I like flying the basketball flag for Ireland. To be nominated for this makes me feel like Ireland might be a little proud of me too, so I’m honoured to be here.”

Moran who is widely considered the greatest Irish women’s player ever for her remarkable all-round game, athleticism and scoring power.

Susan led both her hometown club, Tullamore, and the Sacred Heart School, to U-19 National Cup glory, scoring a remarkable 52 and 48 points respectively in both those 1998 finals.

Later that year she was recruited by NCAA Division One programme St Joseph’s, Philadelphia, for whom she would become the only player in their history to lead the team in both scoring and rebounding for four consecutive seasons and its all-time leading scorer.

In her senior year she was the fourth-leading scorer in all of US college basketball, averaging 22.3 points per game, and for a second time was both honoured as an Academic All-Ireland and the Atlantic 10’s Student-Athlete of the Year.

Upon graduation, she became the first – and still only – Irish player to be drafted by a WNBA side, having been selected in the second round of the 2001 draft by the New York Liberty. She’d later go on to play professionally in Spain, then New Zealand where she was voted league MVP, and then Australia where she again earned MVP honours, this time in the Queensland Australian league.

She particularly excelled with Irish teams – junior, world student games, and then with the senor team, including with the 2009 side that just missed out on European A-level qualification.

Susan has been a member of her alma mater St Joseph’s coaching staff ever since her graduation from there 17 years ago, and is currently their associate head coach.