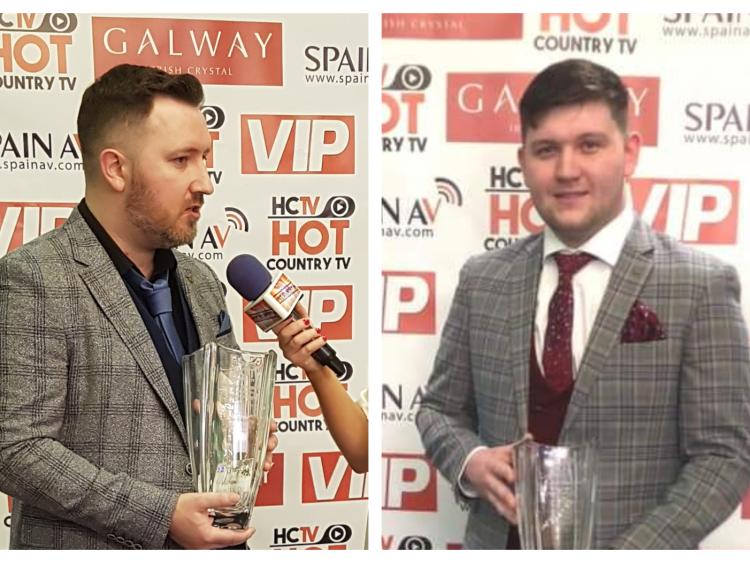 At a star-filled concert in the Slieve Russell Hotel in Cavan on Monday night, two Offaly stars were celebrating after collecting their first ever Hot County TV music awards.

Roe, who arrived on the scene in somewhat spectacular fashion only a year or so ago, claiming the #1 spot on the iTunes Irish country chart with his first three singles, all originals, admitted to being a little overwhelmed at collecting his first big prize in the business.

"I honestly don't know what to say, and that's the truth. Well, I do actually! The first thing I need to say is a big thank-you to Hugh O' Brien and Hot Country for presenting me with this award tonight, and for all of the support they consistently give to the Irish country music scene, and in particular to new and younger artists like myself and others. I have this beautiful piece of crystal here with me now, and only it has my name on it I'd be wondering if it wasn't some kind of mistake."

"But seriously, it's been an amazing night and one that I'm going to remember forever. Last year was my first time to be involved in the Hot Country Awards, and just to perform on the same bill as Nathan Carter, Mike Denver, Cliona, and everybody else, that was a dream come true for me at the time," Alex said.

Roe also had some good news for his fans, as he revealed that a new single wouldn't be too far away.
"It's taken a little while longer than I meant it to, but yeah, there'll be a new single coming very soon. We're pretty close to being finished with it in the studio, so after that it's just a matter of putting a few other bits and pieces in place before we release it. All going well, before the end of May it'll be out there and on the radio."

Colin's latest single, Let's Step Together, was written by himself and released to help raise awareness and funds for the Pieta House event, Darkness Into Light, with almost €1,000 having been donated to date as a result of the Banagher singer/songwriter's efforts.

Speaking after receiving his award on Monday night, the man often affectionately referred to as 'the singing barber' by country fans, was feeling both humbled and excited to be holding the Hot Country crystal in his hand.

"This is a tremendous moment for me, and I'm very thankful to Hugh O' Brien and all of the team at Hot Country who have been great to me over the last few years. Having the chance to perform here again this year, on the same bill as most of the biggest names in the business, has been a pleasure. And to be going home with the Gene Stuart Award, after actually sitting out there in the audience at these same awards and in this same venue just a couple of years ago, that's a very nice feeling."

Although celebrating possibly the biggest moment of his musical career so far, the Borrisokane based barber still had his eye on a bigger picture, and took the opportunity to thank everyone who had donated to Pieta House because of his new single.

"The video for the song is still up on my Facebook page, so anyone who wants to donate can still do so by just going there, clicking on the Donate button, and taking it from there. The response to the song has been amazing in so many ways, I have to say. The most obvious one, of course, is the fact that we've been able to raise as much money as we already have, and to everyone who has donated, thank you so much."

"Pieta House do so much great work, for so many people, they really do. So they deserve every penny that comes their way. And I'm delighted that 'Let's Step Together' has been able to bring a little bit more their way this year."

You can follow more from Alex and Colin on their social media channels.