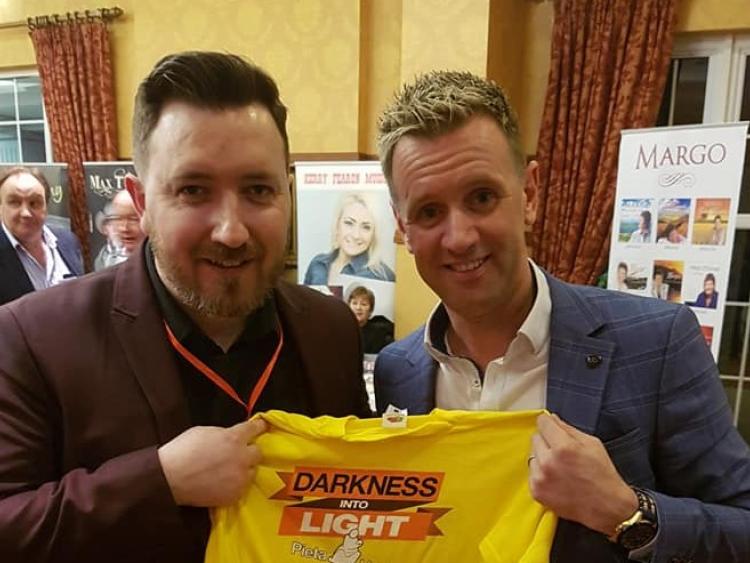 As he prepares to perform at this year's Hot Country TV Awards concert, Offaly singer Colin Kenny has released his brand new single, Let's Step Together, in support of Darkness Into Light.

The song has a powerful message, further enhanced by the accompanying video, showing that Colin has one of the biggest hearts in Irish country music.

The Banagher singer/songwriter penned the emotional song himself after being inspired to do so by his involvement in the walk in various ways over the past few years.

And he hopes the song's simple, heartfelt message will resonate with listeners.

"I think Darkness Into Light is an amazing event, that's the first thing to say. I've taken part myself over the last few years, and I've also seen some of the work that goes into it all behind the scenes, so I know it doesn't just all happen on whatever day the walk takes place."

"As regards my song, I suppose it's definitely from personal experience in some ways. I'm the same as anyone else out there, good days and bad days, and dark places sometimes, too."

Colin continued, "What Darkness Into Light does brilliantly is remind people, in a very visible way, that there's always someone around who you can turn to. Sometimes it's just a matter of asking someone if they have a few minutes for a chat. And people will, they'll be there."

"And on the other hand as well, sometimes if all you do is listen to someone for a little while, that could make all the difference in their world. Let's Step Together is that kind of message delivered in the shape of a song. Maybe hearing the song will be enough to remind someone that they're not alone too. And if it does that, for even one person out there sometime, then that's brilliant."

But the Borrisokane based barber isn't leaving it at just writing the song to help raise awareness of and support for Darkness Into Light. He's also made a very moving video to accompany it. And he's using the video to help raise funds for this year's event.

"With my special guests, Banagher Trinity Gospel Choir, and the help of the team at Rosney Media Productions, we've made a video for Let's Step Together, too. It's up on my Facebook page and there's a donate button there that allows people to give whatever they want to or can afford. And that's all going to Pieta House for Darkness Into Light this year. It's a great cause, and to be able to help in some significant way was something that was important for me to do."

You can support Darkness Into Light by going to Colin's Facebook page, watching the Let's Step Together video, and making a donation. Details of the song's general release on all digital platforms will be announced soon. Colin will be performing at the 9th Annual Hot Country TV Awards Concert in the Slieve Russell Hotel, Cavan, on April 29.