Irish Weather Forecast - WATCH: Temperatures set to drop this weekend and into next week 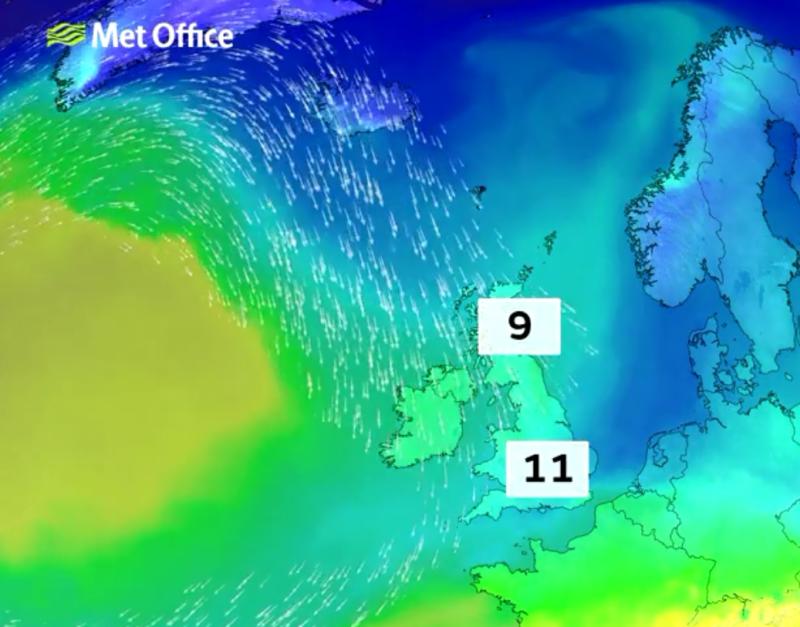 Irish Weather Forecast - WATCH: Temperatures set to drop this weekend and into next week

The weather forecast for the weekend is for temperatures to drop significantly from where they were this week with fog and frost forming at times.

As the video from Met Eireann's forecasting partner, the UK Met Office shows, colder air is set to feed in over the weekend and into next week.

The weather forecast from Met Eireann for the weekend and the early part of next week is for it to be significantly colder with daytime temperatures falling as low as six degrees at times.

The weather forecast states that Friday will be mostly dry with bright or sunny spells in the south and east but some patches of fog may linger there this morning. It will be cloudier in the north and northwest with a few spots of light rain or drizzle by evening. Top temperatures of 11 or 12 degrees in the north and northwest, but 13 to 16 degrees elsewhere in mostly light southwesterly breezes.

The weather forecast from Met Eireann for tonight says it will be mostly dry with good clear spells in the south and southeast but cloudy with patchy light rain in the north and northwest. Lowest temperatures of 2 to 6 degrees, coolest in the south. Winds will be light southwesterly or variable with some mist or fog forming.

The weather forecast says that Saturday will start mostly dry over the southern half of the country but patchy rain in the northern half will clear southwards during the day with brighter weather to follow from the north. Light variable winds will become northerly and freshen later over Connacht and Ulster. It will turn cooler in the northerly winds with top temperatures reaching 9 or 10 degrees in the north and 11 to 13 degrees further south. Saturday night will be dry and clam, but cold with a widespread sharp ground frost.

According to Met Eireann, Sunday will be a bright and dry day with variable cloud and sunny spells. A cool day with afternoon temperatures in high single figures. Winds light and variable. A slight ground frost may form on Sunday night.

The weather forecast for Monday is for a dry start, but rain developing in the west during the morning will spread east to all parts during the day. After a calm start, southwest breezes will freshen with the rain. It'll continue cool.

Met Eireann states that Tuesday will be a distinctly cold day on the weather front with fresh gusty northwest winds. There will be some sunny spells, but with passing blustery showers too - most frequent across the north and west with the risk of hail. Temperatures at best ranging only 6 to 9 degrees.