Irish weather forecast: Met Eireann forecasting change in the weather at the weekend 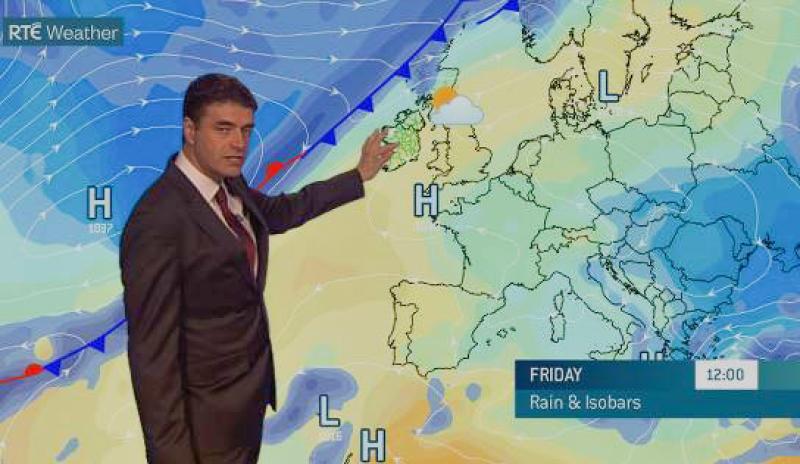 Met Éireann has forecast temperatures between 11 and 14 degrees on Tuesday and this mild spring weather is set to continue for a couple of days before a 'cold front' hits at the weekend.

Met Eireann forecaster Gerry Murphy said on the weather on Monday night that temperatures are expected to climb to 17 degrees on Thursday.

“Weather is going to continue largely dry as we go through the rest of the week. There’ll be a mix of cloud and sunny spells with the best of the sunshine over the southern half of the country in general. In terms of temperatures values up around 11 to 14 degrees on Tuesday but getting up that bit higher through Wednesday and Thursday possibly 16 maybe even 17 by Thursday," he said.

However 'much colder air' is set to hit at the weekend.

"Cold front on Friday making its way in from the north-west through Friday night and into Saturday a little rain pushing down and most significantly introducing much colder air for the weekend behind it," he said.

Despite the cold front and patchy rain and drizzle early on Saturday, it is expected to stay mainly dry and calm on Sunday.

OUTLOOK: Overall a lot of dry and calm weather with high pressure in charge, but with further frosts by night. Any rainfall will mainly occur Friday night/early Saturday with somewhat cooler conditions this weekend.

WEDNESDAY NIGHT: Dry and calm with clearest skies across the midlands, south and east; remaining mostly cloudy elsewhere. Lows of -1 to +5 degrees , coldest under cloud breaks with frost setting in. Some shallow fog patches too.

THURSDAY: Mild and dry with long spells of spring sunshine occurring widely. It will be the mildest day this week with light southwest breezes. Highs of 11 to 16 degrees, best values across north Munster and north Leinster. Cloud will increase across the west and northwest on Thursday night with patchy rain and drizzle developing towards morning. Lows of 2 to 7 degrees, coldest under clear spells in the east.

FRIDAY: A mostly cloudy day with patchy drizzle in the west and northwest. However pockets of mild sunshine will occur over parts of Leinster. Highs of 11 to 14 or 15 degrees, in moderate southwest breezes. On Friday night scattered outbreaks of rain will gradually feeding down from the northwest. Lows of 3 to 6 degrees .

THIS WEEKEND: Feeling fresher in a northwest breeze, with highs of 8 to 10 degrees. Starting out rather dull on Saturday morning patchy rain and drizzle, but brightening up into the afternoon. Mainly dry and calm on Sunday with brightest skies early on.