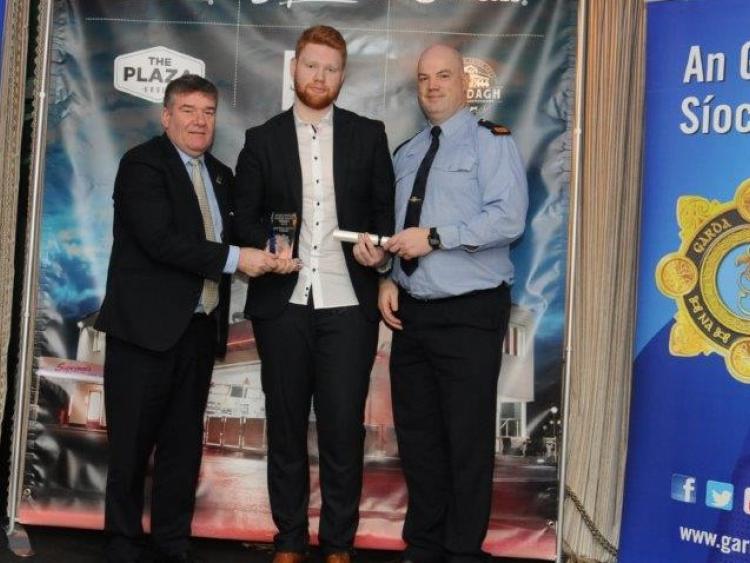 Young Offaly man Martin McDonagh was the recipient of a Garda Youth Award in the Laois/Offaly district at The Killeshin Hotel, Portlaoise on Friday last, February 22.

He had been nominated by the Offaly branch of Jigsaw, the National Centre for youth mental health. The awards celebrate outstanding young people between the ages of 13 and 21 years. Laois-Offaly Gardaí, along with sponsor Supermacs recognise that a lot of good work is being done by young people in every community throughout both counties, which should be awarded.

As a young Traveller in Offaly, Martin is from an ethnic minority that has often been overlooked in Ireland. He has overcome
many adversities in his life to become an inspiration and role model to young people and adults locally, from the Traveller and settled communities.

Martin achieved way above and beyond his academic potential in school at Tullamore College. He worked with huge dedication, application and determination and an exemplary attendance record to get himself to 3rd level at Maynooth University. His sheer focus and hard work saw him win a Maynooth University Access Programme award for leadership - as he showed his community what you can achieve with hard work.

Now studying Law and Spanish at Maynooth University, Martin has a bright future ahead of him. Martin is very proud of his ethnic identity and has been hugely immersed in the work of Offaly Traveller Movement. He has volunteered in a number of capacities throughout his teenage years and has demonstrated great leadership skills.

He completed work experience at OTM and was found to be a very valuable member of the team. Martin is always quick to give of himself and very committed. He has been involved in mentoring and teaching young people from the Traveller community. He was hugely involved in contributing to the content, development and production of Breaking Down Walls, a video production aimed at highlighting suicide among young people in the Traveller Community in Ireland, that inspires a message of hope and resilience.

"Breaking Down Walls is what Martin is all about. He was the first young person from the Traveller community to join the Youth Advisory Panel in Jigsaw Offaly and has been a leading light in doing so since 2015. His work with Comhairle na nÓg up to that time demonstrated his commitment to making a difference in his community, from a very early age," a statement from Jigsaw said.

"Martin participated in numerous training events and planning sessions over the years in Jigsaw. Martin took his voice and advocacy work to a national platform when he competed for and secured a position on the Jigsaw National Youth Advisory Panel (YAP) where his contribution has been greatly welcomed."

"This level of volunteering has required serious commitment with Martin travelling up to Dublin regularly on public transport to partake in meetings and events. With both the Offaly and National YAP, his contribution has included sitting on an interview panel for new members of staff; representing Jigsaw at open days and events across the community; contributing to the development of youth strategy.

"Martin is a true advocate for youth mental health. He always contributes steadily, in a gentle, assured, self-effacing way. He has brought forward ideas and always followed through on actions. Martin’s motivations display true altruism and integrity.
His loyalty has been remarkable and an innate leader, these skills have blossomed, along with his confidence, over the years."

"Martin is not afraid to use his voice even if it’s unpopular but always shows mutual regard, respect and compassion for others.
He does not allow anything to get in the way of being a leading voice for issues that he believes in," Jigsaw said.