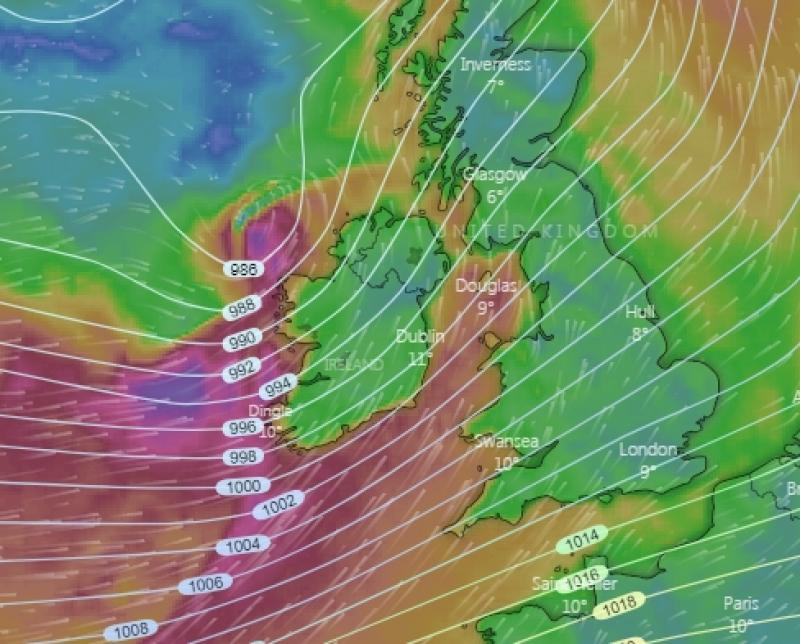 The potentially stormy weather that could be on the way on Saturday. PIC: windy.com

The weather forecast for the coming says from Met Eireann says that it will be much more unsettled with heavy rain and risk of stormy conditions with a return to normal temperatures for the time of year.

The weather forecast from Met Eireann for Thursday says it will be a cloudier day that will be dry much of the time but also with scattered outbreaks of rain or drizzle, especially during the first half of the day. Highs of 11 to 14 degrees in light to moderate westerly winds.

Mostly dry and cold on Thursday night with clear spell and overnight lows of 1 to 6 degrees Celsius with some frost. Later in the night some low cloud or fog will develop, mainly across west and southwest counties

The weather forecast from Met Eireann for Friday says it will be a cool start in the morning with fog and any remaining frost clearing. It will stay dry across the eastern half of the country through the morning, with bright spells at first, but rain will move in during the afternoon. Duller further west with rain in the morning, turning persistent and extending eastwards during the afternoon. Some heavy bursts are likely later. Afternoon highs will range 10 to 13 degrees Celsius, in mostly moderate southerly breezes, but winds will be fresher though along the south coast. Wet through the evening, but the rain will clear into the Irish Sea early in the night, however further rain will push in off the Atlantic later in the night in strengthening southerly winds. Frost is unlikely with overnight lows of 4 to 7 degrees Celsius.

The weather forecast from Met Eireann for Saturday says it will be windy or possibly stormy for a time in the northwest. Widespread heavy rain will give way in many areas to sunny spells and scattered squally showers. However the showers are likely to be prolonged and heavy in parts of the north and northwest with some hail and local thundery. Chilly in temperatures of 7 to 10 degrees. Strong to gale force winds will be very squally for a time in the northwest, but winds will moderate later. Frost overnight with patchy fog in lows of 1 to 4 degrees Celsius.

The weather forecast from Met Eireann for Sunday is for it to be drier and calmer for a time early Sunday with some bight spells. However clouding over quickly from the south with rain developing southern areas, extending northwards as the day goes on with strengthening easterly winds. Some heavy rain is likely in many places later in the day and overnight with possibly sleet also. Cold with afternoon temperatures of 5 to 8 degrees Celsius. Becoming very windy in southern areas as well with gales.