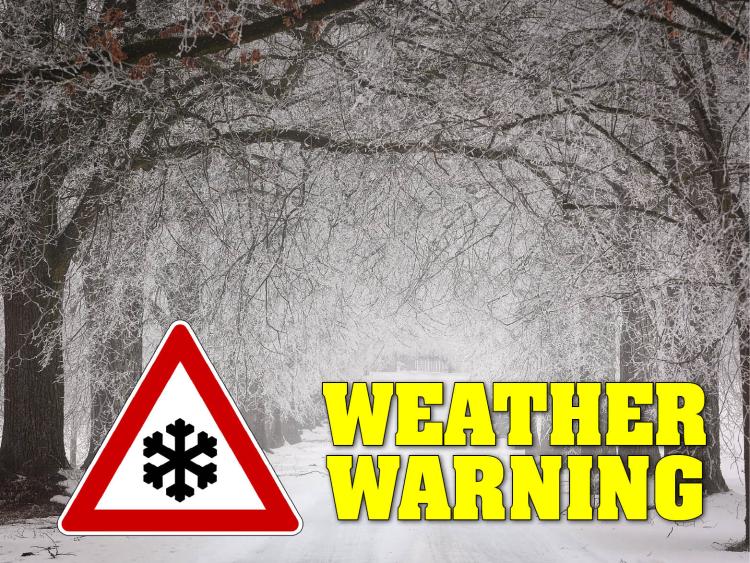 The weather forecast for tonight and tomorrow is for bitterly cold weather with icy roads, freezing fog and the risk of snow accumulations in places. A Status Yellow Snow-ice Warning is in place from Met Eireann for Ireland and it remains in place until 12pm on Saturday.

The weather forecast from Met Eireann for Wednesday night says that it will be mostly dry with good clear spells at first and just the odd wintry shower lingering in the northwest. It will be very cold with widespread severe frost and ice on untreated roads. Lowest temperatures will fall to between -2 and -5 degrees. Winds will be light southerly at first with widespread mist and fog and the risk of freezing fog in places.

However the forecast adds that later in the night, cloud will increase from the west with outbreaks of rain pushing into part of the west and southwest before dawn. The rain will be preceded by sleet and snow on higher ground. Southeasterly winds will freshen towards morning and become strong and gusty along south and west coasts.

The weather forecast from Met Eireann for Thursday says it will be very cold and windy with outbreaks of rain spreading northeastwards, turning heavy or persistent for a time. The rain will turn to sleet or snow for a time over Connacht, Leinster and inland parts of Munster with the risk of snow accumulations over mountainous areas. Afternoon temperatures will reach just 2 to 5 degrees, but 6 or 7 degrees in the southwest. Southeast to easterly winds will increase strong and gusty and veer east to northeast later.

The weather forecast from Met Eireann for says it will be very cold and frosty on Thursday night with icy roads and also some lying snow. Frosty from the start over Ulster with some pockets of freezing fog. Windy for a time elsewhere with a mix of rain, sleet and snow. The snow is likely to be heaviest over much of Munster and south Leinster, with some significant accumulations in places. But this band of weather will clear southwards later in the night and the fresh and gusty east to northeast winds will moderate also. Icy here also with lying snow in places. Overnight lows generally below zero between -2 and -5 C., coldest over snow fields but zero or + 1 along the south and southeast coasts.