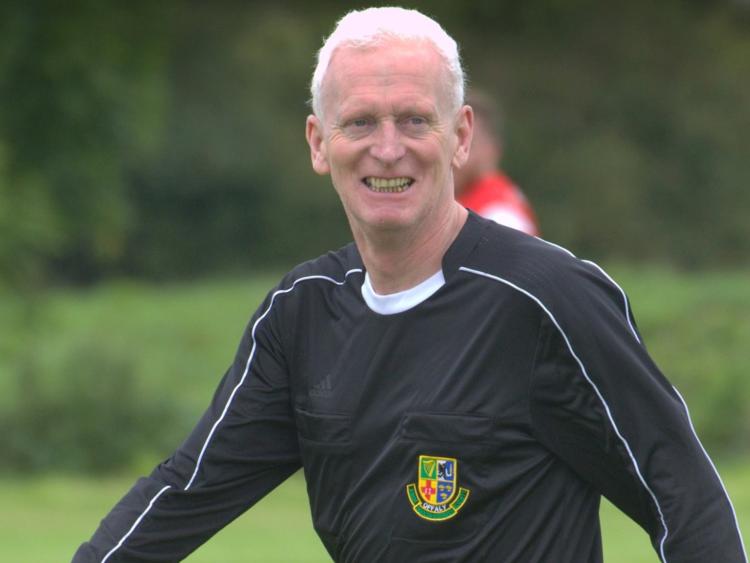 Long-serving Offaly soccer referee Patrick Geoghegan has announced his retirement from the game after almost 25 years as the man in the middle.

Taking to social media, Pat, known affectionately as Giggsy, said, "that's it, folks, I have finally made the decision to officially retire as a referee. I started as a referee in 1995 and have been involved week in week out across the Midlands."

"I met some fantastic people from league officials, players, managers, supporters, colleagues in the Offaly branch, and indeed in the Midland branch of the Irish Soccer referees society."

"I have been very fortunate to referee in very prestigious games and enjoyed the journey. Some days driving home alone in the car, the head would be wrecked, and I would try to make sense of what had gone wrong in a game, never my fault, of course, and I'm sure the family knew when things had gone astray as I would be like a bear at home."

"I would say to myself, that's it I'm out, then next week's fixtures would come out and I'd go again, and sure that is sport," the man affectionately known as Giggsy recounted.

"To all the people I met on the journey, I'd really like to say thanks for the memories; it was worth all the good and bad. To the many who felt I didn't like them, and I'm sure there are quite a few, it was never personal."

"The job of a referee, while enjoyable, is also difficult, so just remember the guy in the middle is just an ordinary guy or girl trying to stay involved in a sport that he or she loves, and will make decisions that may not be to your liking, but are just opinions on what he or she believes is correct at the time."

"Hopefully, I will see some of you from time to time and we can share a laugh over things that we thought were life-changing decisions at the time," Pat concluded.

Players, officials and friends were quick to pay tribute following Pat's announcement, with Chris Nestor saying, "football will miss you and all the banter that came with you as well. Thanks for many years and countless matches that you looked after."

David Hughes said, "best of luck and enjoy the retirement, Pat." He described him as a "big loss" to the game and "a gentleman on and off the pitch."

Denise Mackey Dillon said, "best wishes on your retirement; one of the best and fairest referees."

Seanchail Kelly wrote, "best of luck Giggsy in the future. I’m sure as the legs get older it gets harder to do the job as you’d want to. I don’t think I could aim a bad word in your direction, not an easy job as you say, as 50/50 decisions have to go one way and you won’t please everyone. Thanks for those years you gave, the game couldn’t survive without people like you."

Gordon Brett added, "you'll certainly be missed in the middle, Pat. Hopefully you'll stay in the game. You are one of the best referees I came across and you did your job/hobby/passion with a great sense of humour also. I was always happy to see you arriving to ref a game I was playing in and that's the best compliment I can pay you as an ex-player."

Fiachra O Connor commented, "enjoy your retirement, Paddy. You were in the top bracket when it came to referees. No favouritism, cared a lot about the game and always tried your best. Many a time we finished on the losing team when you reffed but we could never say it was the ref's fault. Very fair."

Sean Dowling described Giggsy as one of the most consistently good refs there has been, adding, "you always gave your all in a fair and professional manner and it's an honour to call you a friend, enjoy your retirement, but once a ref always a ref."

Martin William said, "best wishes, Pat. It was an honour to line with you, especially in the big games. A great and respected ref, who kept your cool, wit and dignity for all occasions."