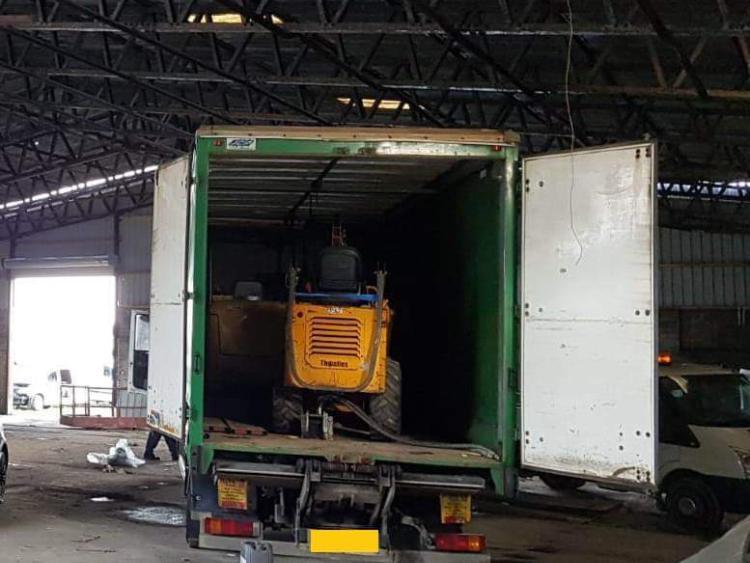 A lorry with heavy good machinery which was found inside a large commercial premises in Edgeworthstown last week.

Gardaí have uncovered a second major industrial premises of suspected stolen machinery inside a week during a planned raid on a commercial unit on the outskirts of Longford town.

Industrial plant, tools and other equipment worth an estimated €150,000 were discovered at a unit located in the Shroid area shortly before 5pm.

The raid was carried out by uniformed and detective branch officers from the Granard and  Longford Garda Districts as well as members from the Garda Stolen Motor Vehicle Investigation Unit.

It’s the second large discovery made by gardaí into the suspected theft of machinery in the county over the past seven days.

Last Thursday Units from the local Regional Support Unit, the Garda Stolen Motor Vehicle Investigation Unit, the National Bureau of Criminal Investigation and the Longford Drugs Unit uncovered a so-called ‘chop shop’ where machinery and van parts with an estimated value of over half a million euro was discovered.

Some of the seized items were identified as having been stolen in the UK over the past few months.

The scene is currently preserved and the technical examination continues.

No arrests have been made, but garda bosses believe this evening’s discovery represents a major breakthrough as part of an inquiry involving senior personnel from the London Metropolitan Police and other police forces in the UK.

Garda Superintendent Brian Mohan confirmed this evening’s find was linked to the earlier discovery and would form part of an ongoing investigation into the theft of high value commercial and industrial plant machinery.

“We (gardaí) believe this to be a significant development as part of our inquiries.

“It is also further evidence that we are making inroads into clamping down and targeting criminality within the area.”