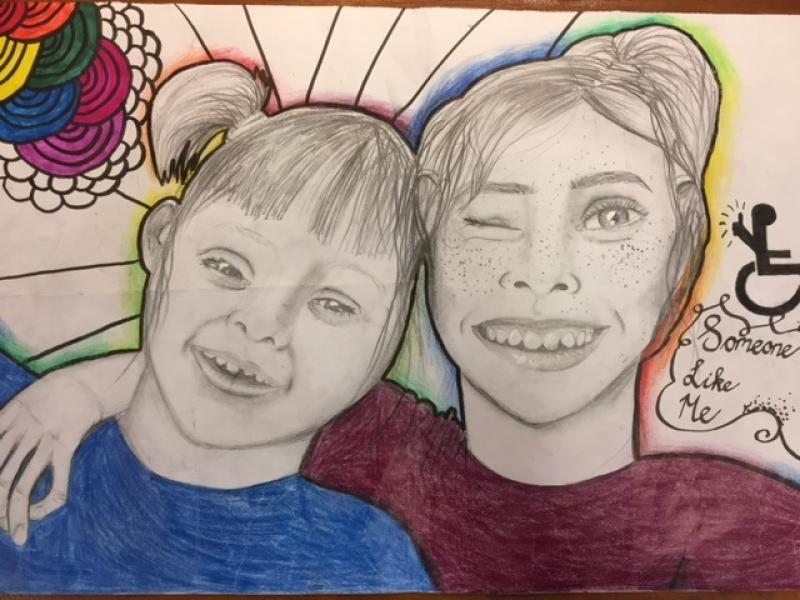 The winning entry from Ballybryan NS

Ballybryan National School in Rhode is celebrating this week as the judges of a leading national art competition have named the school as County Winner in the Senior category, placing them in the running for what has become a much sought-after national title.

The competition, which is entitled ‘Someone Like Me’, is supported by the National Disability Authority. It aims to promote disability awareness and nurture understanding amongst primary school students and to highlight the similarities that exist within people of all abilities.

The entry from Ballybryan National school named as Senior County Winner, was from Sheana Fallon, 5th class pupil whose drawing depicted a scene promoting inclusion and that everyone is equal. Teacher Brian Darby assisted in the school submission.

Now an annual initiative, ‘Someone Like Me’ promotes inclusion and positive attitudes towards all persons, allowing children to learn about and discuss these topics and creatively express what they have learned through art and craft.

The judges, Caomhán Mac Con Iomaire, Mark Maguire and Ellen Keane, were greatly impressed with the artistic efforts of pupil Sheana Fallon and teachers at Ballybryan National school for their imaginative ‘Someone Like Me’ submission which was selected for being exceptionally insightful and inspirational.

Congratulating the Offaly school on becoming county winners, Minister of State with special responsibility for Disabilities, Finian McGrath T.D. said that he was hugely encouraged by the number of competition entries.  “I am delighted to say that this year we received almost 2,400  entries for this wonderful competition, which highlights the passion and continued enthusiasm that teachers and pupils alike have toward this initiative,” he said.

“More than 600,000 people in Ireland have a disability, and children under 15 make up 53,000 of that figure. The National Disability Authority strive to promote inclusiveness in all of the work they carry out, and the fact that an entry was received from every county in Ireland highlights that by providing a creative outlet in which we can build understanding and awareness of our different abilities, we can truly discover the similarities that unite us all.”

“For the teachers and pupils who have all contributed to this competition, I would like to express our gratitude to you, and to point out that by taking the time to think and create an entry that your own knowledge and understanding of disability will have evolved. Education is integral to improving positive attitudes and inclusiveness for all members of society.”

National Disability Authority’s Chairperson, Helen Guinan, said, “The National Disability Authority (NDA) is very happy to be supporting Someone Like Me. The quality and breadth of the winning entries reflects the interest and creativity of the pupils involved. Creating positive attitudes at primary school level is very important. The NDA has commissioned four national surveys on public attitudes to disability, since 2001. The evidence from each survey suggests that the earlier that positive attitudes towards disability and mental health are introduced the greater the opportunities are to promote inclusive education and to improve outcomes for persons with disabilities as they grow older.

Ballybryan National School will now go on to compete with 45 other schools from around the country for the overall national “Someone Like Me” award which will be announced by the Minister for State with special responsibility for Disabilities, Finian McGrath T.D. at a ceremony at Dublin City Hall on Wednesday, December 5.

The competition, which offers a range of prizes up to the value of €750 was open to all primary school pupils from junior infants to sixth class and 2,400  entries were received from individual pupils, class groups and whole schools right across Ireland.  Entries ranged from posters and collages to large sculptural installations and multi-media pieces.