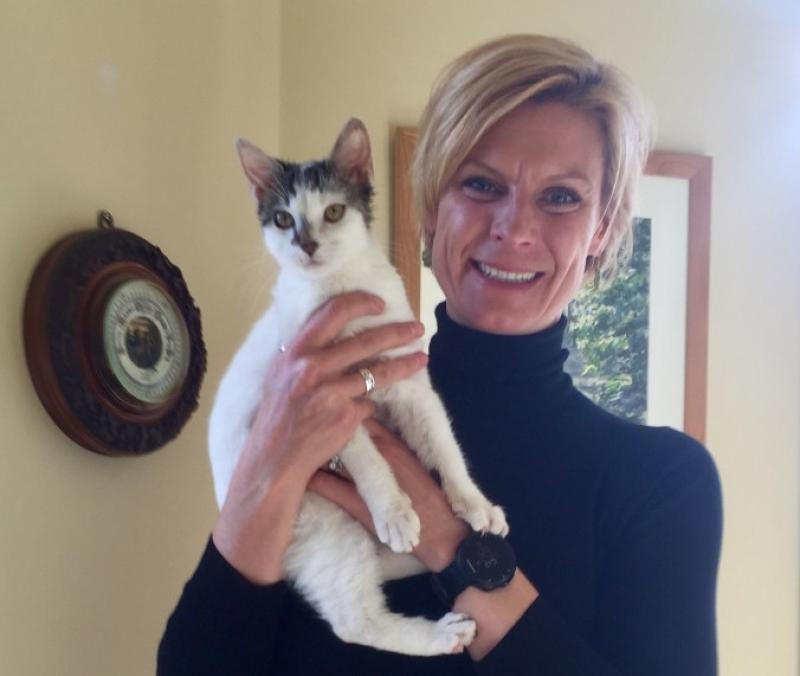 An Offaly cat and her relieved owner have been reunited after a truly remarkable adventure for the roving feline.

Even before her latest excitement, Donna the kitten had more than her fair share of excitement as her owner Pippa Hackett explains.

"Donna came into our lives two months ago. Friends of ours in Kilkenny found her wandering with a broken tail, which unfortunately had to amputated, leaving her with a stubby one inch tail. We agreed to re-home her, and she has been a popular and quirky little addition to our household. She’s a very playful and gentle cat, and we’re delighted to have her. The kids are smitten with her."

However last Wednesday, when the family returned from a trip to Kildare, Donna was nowhere to be seen. Pippa thought that the new addition to the house had just wandered off for the evening, as cats often do. However there was still no sign the next day. A search was carried out, including a check with the neighbours, but Donna was nowhere to be found. Pippa says she feared the worst and had lost hope of finding the family pet.

The next morning, Pippa widened the search by posting about the missing cat on Facebook and contacting the OSPCA, who she says were 'really helpful and kind'.

The post on Facebook reaped rewards within hours, but not from a source that Pippa was expecting.

She told the Offaly Express, "I had a message from a friend of mine asking if we had been at Goffs this week. My heart skipped a beat, when he said he had seen a little white cat with no tail there on Wednesday. But this was now Friday! I called the Goffs office, and they put me through to their ground staff. Lo and behold they knew all about the kitten with no tail, and had been looking after her since Wednesday. She had been taken home by Mary that morning. Mary rang me to say she had Donna, and that she was in great form, purring away by her side! We arranged to meet in Monasterevin, and I really couldn’t believe we had her back. The kids were over the moon - we all were!"

It is a 60km round trip from Pippa's house in Offaly to Goffs and the roads are a mix of bumps and bends, stops and starts, as well as a length of motorway from Monasterevin to Goffs and yet the adventurous kitten somehow managed to make the journey in the engine bay of a car.

Pippa remarked, "This little cat is getting through her nine lives, but hopefully she’s finished with the adventures now, and will stay put at home! It’s really heartening to think that there was someone looking after our little Donna, and we should always remember that there are plenty of kind people out there. A good news story for a change."