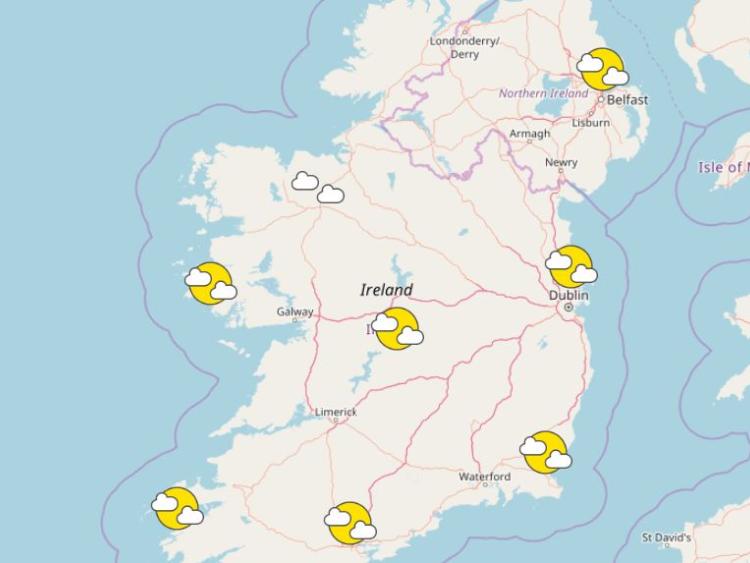 Offaly forecaster gives unbelievable weather update for the week ahead

Cathal Nolan from the Midland Weather Channel gives us an incredible forecast for the week ahead...

A west-east divide takes place on Tuesday, with eastern areas of the countries likely to experience mainly dry and bright conditions, whereas further north and west there will be more in the way of cloud, with the threat of some outbreaks of rain and drizzle. Feeling cool with temperatures below average for the time of year, ranging between 13-16 degrees Celsius

Noticeably warmer on Wednesday, with southeasterly winds feeding in much warmer air, with temperatures rising as high as 20 degrees Celsius in some southern and eastern areas of the country. The day itself will begin rather overcast in western and northern areas, with some outbreaks of rain and drizzle possible on Atlantic coasts. Drier further south and east with some sunny spells developing.

Dry conditions persisting for Thursday, with sunny spells developing more widely across the country. Temperatures will range between 15-18 degrees Celsius, warmest in the south and east once more. Overnight ground frosts may also occur from Thursday night onward.

Similar conditions are expected on Friday, with all areas expected to see some good sunny spells, with some cloudier interludes possible at times. Feeling pleasant in any sunshine, with temperatures ranging typically between 15-17 degrees Celsius in light and variable winds.

Remaining settled over the course of the weekend, with a large area of high pressure settling directly across the country. This will lead to very settled weather conditions, with some good sunny spells. Overnight frosts are likely, with day time values ranging between 14-17 degrees Celsius.