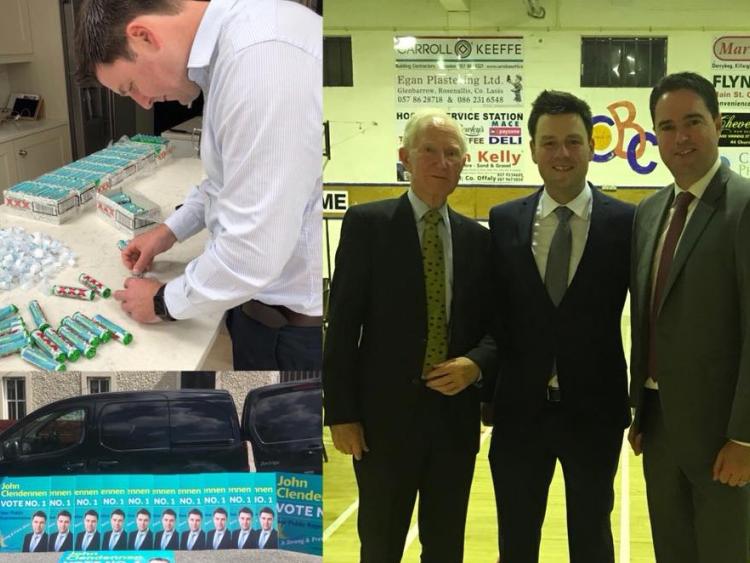 Following last night's Fine Gael selection convention for the Laois-Offaly constiuency, Offaly County Councillor John Clendennen has said "it’s a great honour to be a Fine Gael candidate for the next General Election."

"I owe a large depth of gratitude to my supporters and members of the party that turned up in force last evening to Clonaslee Community Centre. I’m looking forward to the challenge ahead and working for Laois-Offaly as a strong and fresh voice," he added.

John Clendennen says he has five areas he wants to focus on during his campaign to be elected to the Dáil and that he wold prioritise in the future.

They are to build and grow the local Fine Gael organisation, to address Health Services, Local Economic Activity, Tourism Development and the 2040 National Planning Framework.

Speaking specifically about health issues, Clendennen said, "I am a strong advocate for community health services and a need for further investment in home supports, particularly for the elderly and those most vulnerable."

"Projects such as Birr Primary Care Centre, which I am 100% committed to, must be progressed, and will be a major contributing factor to reduced hospital waiting times and demand for A&E departments."

Clendennen recently voted in favour of a material contravention that would have allowed the Birr Primary Care Centre to go ahead at the site of Birr Rugby Club but his position, that of his party colleagues in Fine Gael and the Sinn Féin councillors, was shot down by the Fianna Fáil and Independent councillors. The development's refusal has since been directed to An Bord Pleanala.

On the issue of the economy, Cllr Clendennen said, "National unemployment figures are now 5% but figures remain high in our region, and with one of the lowest third level degree attainments, plus the reduced activity in Bord Na Mona, concerted effort is required to ensure that the region is not left behind."

"Our SMEs and the agricultural sector must be supported and encouraged as the largest employers in the area. However, we must call on Enterprise Ireland and the IDA to identify why we’re not achieving the big wins that others counties have enjoyed."

"I don’t want to see one more light go out in a rural village. I want to see medical centres, Garda stations, Post Offices, rural link, broadband and schools fully supported and additional investment to ensure their longevity," Clendennen commented.

"I want to see the faster execution of a plan to address houses and premises that have been lying idol for years, and return them to their former glory."

With a background in Tourism, the Kinnitty man said tourism promotion has been one of his key priorities for Offaly County Council to date.

"With less than an hour from Dublin and a market of over 1,000,000 people, my experience in tourism and hospitality has shown me the potential the midlands have, but it will require vision and hard work to deliver on the regions true potential."

In conclusion, Cllr Clendennen said, "I am the future for Fine Gael in Laois-Offaly. I’m not here for political point scoring, I’m not here to make up the numbers, I am here as a genuine alternative option."

"I’ve international experience but my roots have always been in the local community, whether it be playing hurling for Kinnitty/Offaly, working in the family business, or representing the people of Offaly," he added.

"There is a sea of change in Irish politics and I want to be the one to bring your local issues forward to the national agenda."