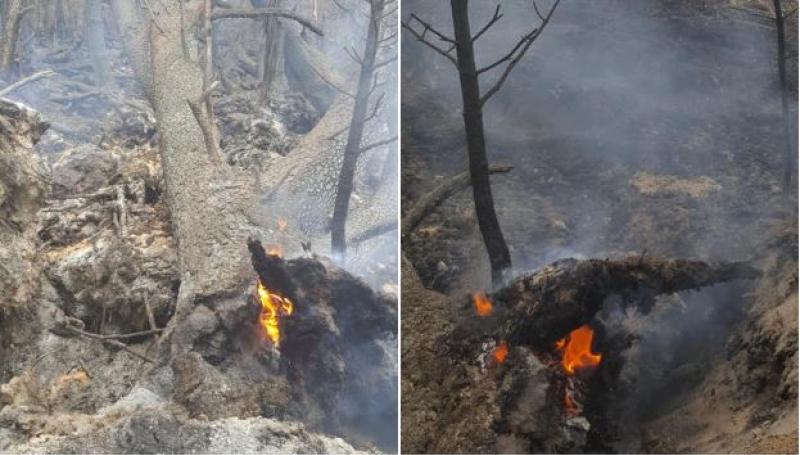 Much of the bog burned by the raging fire is in a Slieve Bloom Special Protection Area.

Members of the association spoke with Project Officer, BirdWatch Ireland and Chairman, Irish Wildlife Trust Laois-Offaly Ricky Whelan about the aftermath of the fire and shared an update on social media.

The post on Facebook outlined in detail the effects the fire has had on wildlife so far.

There is concern for rare and vulnerable Red Grouse birds and ground nesting hen harriers.

"The fire managed to burn large tracts of Coillte plantation forestry and also destroyed Blanket Bog and Scrub habitats in the area between the Cut Nature Reserve and the "Booster Station".

"C400-500 acres of Blanket Bog have been affected. Much of this area is part of the Slieve Bloom Special Protection Area (SPA) which is designated under the European Birds Directive to protect rare and vulnerable species which breed in the area.

"Hen Harriers are predominantly a ground nesting species, they nest amongst heather in our uplands which makes the chicks vulnerable to these fires.

"The Slieve Bloom SPA has been the best performing area for Hen Harriers in recent years in the context of successfully fledged young.

"These Hen Harrier populations are under constant review by the National Parks and Wildlife Service (NPWS) and partners. It is believed that a number of Hen Harrier nests were/are still active at the time of the fire and it is not clear if any have been negatively affected as a result. This is of grave concern given the conservation status of the species in this country and any loss of individuals is worrying indeed.

"Other species such as Red Grouse are considered rare and vulnerable and are one of the species qualifying the Slieve Blooms SPA. Red Grouse are a ground nesting Game bird but nest earlier in the spring so it is hoped and expected that adults and offspring will in most cases moved to avoid the fire. Saying this, Red Grouse adults eat heather almost exclusively so the loss of 400 to 500 acres of suitable habitat will affect this population by reducing the availability of food locally. These birds are sedentary, meaning they remain in the same area their entire lives and will not move far to find new food sources.

"There are large numbers of deer that roam the mountain. The species found there is Fallow Deer which are the most commonly found species in Ireland. Fallow deer give birth to fawns in June and young are left hidden in vegetation during the day whilst the female grazes. The female will return to nurse the fawn at intervals. This is a strategy designed to avoid predators during the most vulnerable part of the fawns life. The fire came right at a time when many fawns will be on the mountain and may have been separated from their mothers leaving them orphaned. Saying that, if you come across a fawn lying in thick cover alone it can just be left there by mum who will return later to feed. Young deer, unless you are certain are abandoned, should be left alone.

"Less mobile fauna such as frogs and lizards will probably have suffered most, young hares too (although peak breeding season is over) may have suffered in the fire.

"The fire will have also destroyed all plants in its path. These plants together make up complex habitats that can take years to recover and re-establish. Depending on how fast the fire burned it can often destroy only the surface layer leaving the soil and the seed layer intact meaning that the habitat will recover much more quickly. This remains to be seen how badly the fire will affect the habitat overall but certainly in the short to medium term its bad news all round," the Slieve Bloom Association wrote on Facebook.

Chairperson of the Slieve Bloom Association, Seamus McDonald, told the Leinster Express on Monday that a lot of damage was done.

"Sadly, there is a lot of damage done which is a big loss to Coillte and to wildlife. Walks in the Slieve Bloom and tourism has also been effected. Everyone should wait until it is all over before going walking.