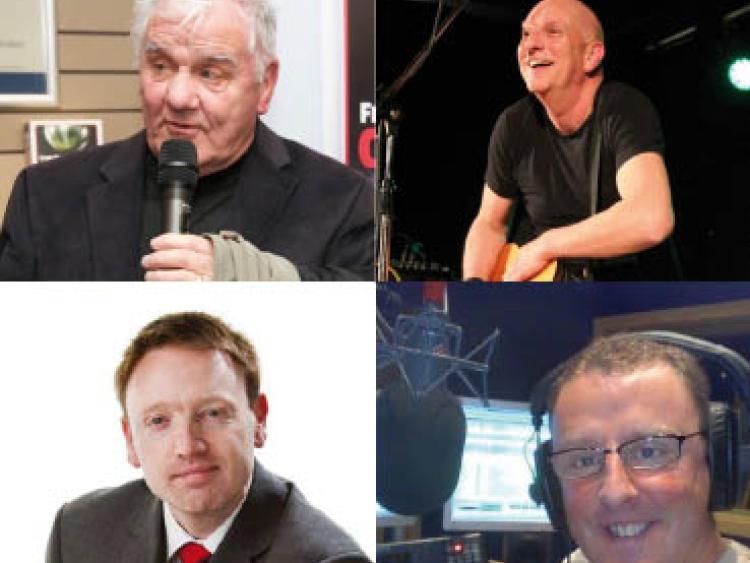 Some of the presenters on Tullamore Community Radio which has its On Air day this Saturday. Clockwise from top left: Ricey Scully, Brendan Keeley, Tommy McCabe and Liam Dumpleton

Since it’s inception in early 2017, a hardworking group of volunteers have put together a company, established a working Board, fundraised for it’s own existence and formed the genesis of what will become known as ‘TFM Radio’. The station is based online and can be accessed via www.tullamorecommunity radio.com, it’s available on all internet devices as well as the free Tune In Radio app in the IOS app store and Google Play.

Read also: Hosepipe ban to come into effect in Offaly and across the country on Friday

The station is the brainchild of Tommy McCabe, Jason Maye and Liam Dumpleton and all founding members have leading roles within it. Mr McCabe is Station Manager of ‘TFM’ and CEO of the company aswell as presenter of his own Saturday afternoon show.

Mr Maye was instrumental in getting the company legally founded and remains an active advisor behind the scenes while Mr Dumpleton serves as Chairman of the company and presenter of the flagship show ‘Tullamore Talks’.

The radio station is proud to announce it’s schedule to listeners and it boasts great local talent behind the microphone, none more than two of it’s biggest stars; legendary broadcaster Ricey Scully and Tullamore’s singing legend Brendan Keeley.

Station Manager Tommy McCabe commented, “we are very proud of our line up, we have young raw talent mixed in with experienced presenters who have been part of the Midlands fabric for decades.”.

He added, ‘”having people like Ricey and Brendan presenting their own shows brings it’s own huge audience, people who are loyal listeners and new people too’.

TFM Radio will broadcast programmes for the first time all day Saturday starting with ‘The Ricey Scully Show’ from 9am to 11am. This will be followed by the station’s flagship programme ‘Tullamore Talks’ with Liam Dumpleton, a show aiming to encapsulate all that happens in Offaly’s county town.

Shane Hughes will follow Liam from 1pm to 2pm with ‘The Tullamore Diary, a show outlining all scheduled events across the town and it environs and the background to them.

Tommy McCabe will be out and about in Tullamore from 2pm to 5pm with ‘The Saturday Show’ bringing together a mix of music, chat and entertainment. Fans of the 1980’s will be treated to two hours of memories when Glenn Ryan presents ‘My Kind of 80s’ from 5pm to 7pm.

From 7pm to 9pm its The Colin Hughes Show with a great mix of music and news from the world of arts and entertainment.
The overnight schedule then kicks in with non stop music hits all through the night into Sunday morning.

A wider range of programmes to fill Sunday and weekdays is already in production with the focus on various community based shows coming to the fore and presented by the activists in those areas.

Tullamore Community Radio, or ‘TFM Radio’ as heard in it’s on-air jingles will remain as an online internet station for the foreseeable future, but plans are already being made for it’s transition to FM in November.

Station manager Tommy McCabe said, “we are at the business end of our FM submission to the BAI (Broadcasting Authority of Ireland), but until then we will be staying online and working with the various local businesses and traders by way of sponsorship of programmes and other such association.”

He added, “we are delighted and very thankful that Tullamore Credit Union is the main sponsor behind our flagship show ‘Tullamore Talks’, this is a great opportunity for ourselves and the Credit union to work together."

The team behind the radio station say they are very proud of the people of Tullamore for getting behind the project from it’s earliest days and they are vowing to give their very best in local programming features and production.

Chairman Liam Dumpleton expressed his thanks to everyone involved saying, “This radio station couldn’t and wouldn’t happen without the team of dedicated volunteers we have..they have given the most important thing that anyone could ever give their time’. He added, “on behalf of the entire team at Tullamore Community Radio, thank you to the people of Tullamore for believing in us.”

Both Ricey Scully and Brendan Keeley expressed their own delight at getting involved as presenters saying it was for a great cause and purpose in that it serves all the community of Tullamore.

Tullamore Community Radio’ remains a not for profit community project and it aims to reach into every part of Tullamore life and bring it to the people. People can contact the station via it’s Facebook page, Twitter or email info@ tullamorecommunity radio.com or by approaching any of the volunteers.

The radio station has it’s launch this Saturday morning, July 7, starting at 9am with ‘the Ricey Scully Show’