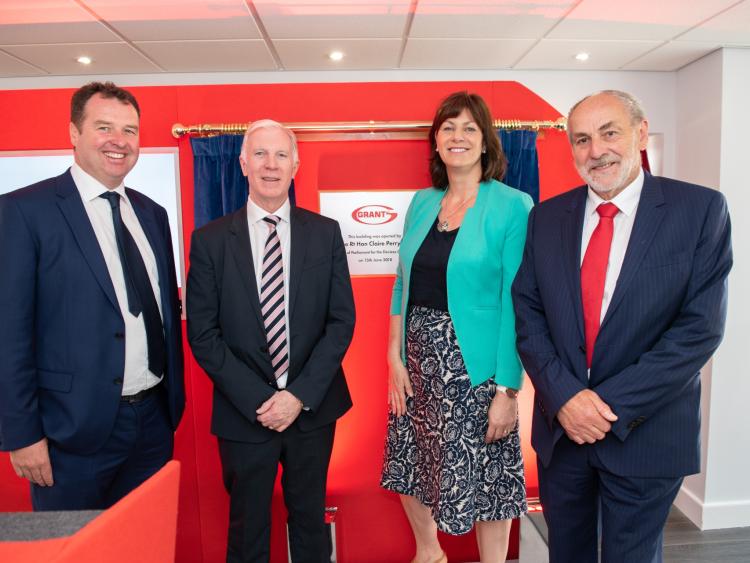 Offaly based engineering firm Grant Engineering have met with the British Minister of State with responsibility for Business, Energy and Industrial policy to dicuss their Brexit concerns.

At a recent event held by Grant Engineering at their facility in Devizes, Wiltshire, the Directors Stephen Grant and Niall Fay met with Minister Claire Perry to discuss several issues, most importantly that of the need for a "frictionless trade between
Ireland and Britain post Brexit."

The example of steel was given to the minster as an example of how deeply supply chains run between Irish and British companies. There is no steel mill on the island of Ireland and Grant currently sources its steel from a steel mill based in Port Talbot, Wales.

At this mill the steel is produced into coils, these coils are then shipped to Lisburn in County Antrim. At the Lisburn facility the coils are uncoiled, cut into sheet form and put onto pallets. These pallets are then brought to the Grant Engineering manufacturing plant in Birr, where it is a core product in the fabrication of boilers.

Boilers are then shipped to Grant’s facility in Devizes, Wiltshire, where they are then distributed throughout Britain.
During the discussion with the Minister around this example, the Directors of Grant explained how critical it is for all companies in both Ireland and Britain to have tariff free trade post Brexit.

The imposition of tariffs on trade would result in huge disruption to not just the Grant Engineering supply chain, but to all Irish and British companies supply chains, that will add unnecessary cost, delays and do damage to both economies, they said.

Grant has had a subsidiary in Wiltshire for over 25 year and employs 80 people involved in distribution, warehousing, technical support, sales, marketing, logistics and general administration.

Grant Ireland is based in Birr, County Offaly, where it has its main manufacturing plant and employs up to 320 people and has been in business for nearly forty years.