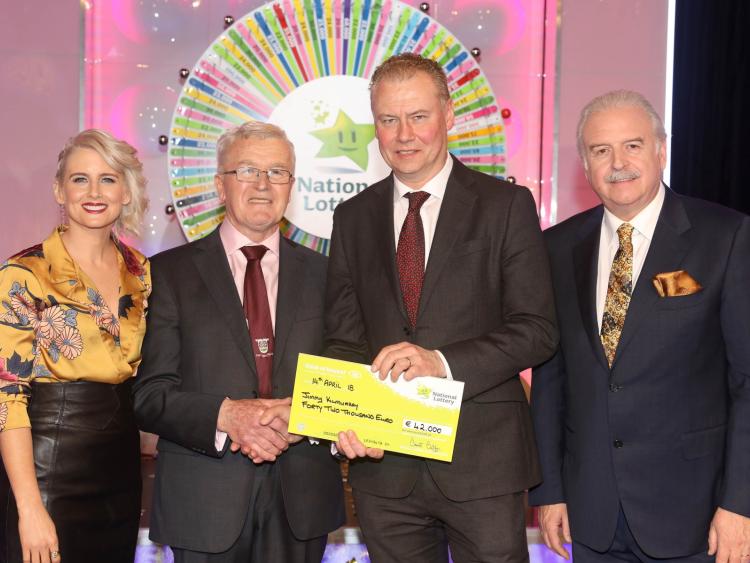 An Offaly man who spun the Grand Prize Wheel on Winning Streak on RTE One on Saturday, winning a total of €42,000, claims he is the fifth person from his country road in Daingean to appear on the popular game show.

Retired former Bord na Mona employee, Jimmy Kilmurray, thought he was the butt of an April Fool’s joke by his wife Rosie when she crashed through the living room door shouting that his name was pulled out for Winning Streak. But happily it was no joke as Jimmy spent the next few hours taking calls from family and friends wishing him well.

MORE TO READ: Offaly man picks up cheque for €35,000 after Winning Streak appearance

Jimmy claims that he is the fifth person from his country road to go on Winning Streak over the years – making it the luckiest road in Ireland!

He has been married to Rosie for the past 47 years and the couple have five adult children: Collette, Dorothy, Pauline, Declan and Niall. Jimmy is also a proud grandfather and has 10 young grandchildren who he adores.

Despite being retired for many years, Jimmy keeps himself very busy and frequently collects some of the grandchildren from school. He keeps fit by going out for walks and has a very keen interest in astronomy. He owns a couple of telescopes and enjoys reading up in books or online about the field of astronomy.

Jimmy has lived in Daingean for all of his life and  he is passionate about Gaelic football, especifically Daingean GAA. He played for his local club back in the 1970’s and rarely misses supporting a game from the sidelines these days.

Winning Streak scratch cards also offer players the chance to win a once-in-a-lifetime luxury cruise for two worth €5,000. To enter the draw for the Luxury Cruise for two, entrants must collect the 3 letters S-E-A from the stub portion of their Winning Streak scratch card and send those into the National Lottery in the special grey stub envelope which are available from National Lottery retail sales agents. The winner of this week’s cruise is Julie Wolohan from Midleton, Co. Cork.

The Winning Streak TV Gameshow is based solely on chance and there is no skill involved. To enter, players must submit a 3-star ticket in one of the special 3-star envelopes, which are available from all National Lottery Retail Sales Agents. On the Thursday preceding the gameshow, one hundred 3-star entries are drawn randomly in a preliminary draw that takes place under strict security controls in National Lottery offices. From these 100 entries, the five players for the following show are drawn and their names are featured on the gameshow.