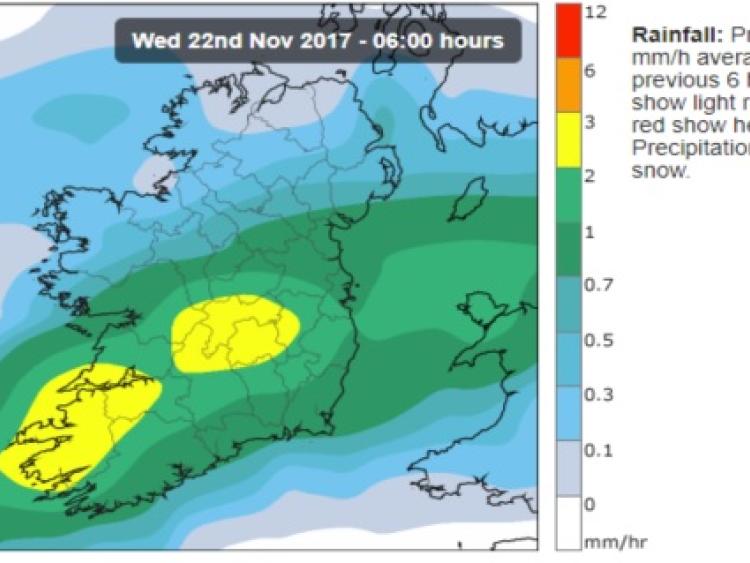 Laois and Offaly was hit with a deluge of overnight and early morning rain which has resulted in flooding across the counties.

Met Éireann rain tracking images showed that the Leinster midland counties bore the brunt of intense rainfall over the county at 6am, Wednesday, November 22.

SEE ALSO: Many roads around Offaly flooded this morning

Latest imagery show that the rain is clearing but the warning remains in place until 9pm tonight. Emergency services and  County Councils are working to make roads passable. 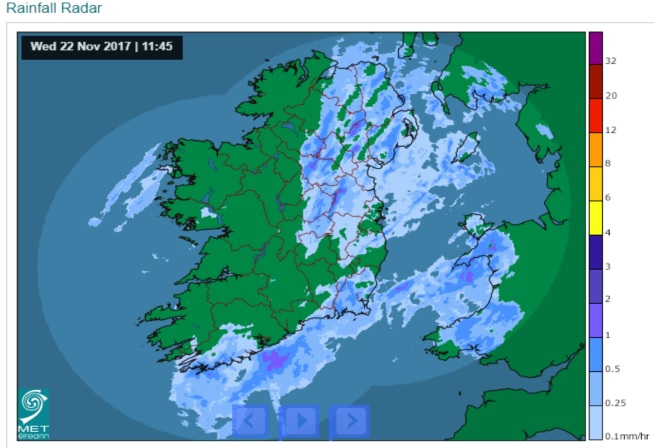 A national weather warning for rain and flooding remains in place until tonight but Met Éireann also warning that a polar weather will bring freezing conditions and wintry showers.

Under the Status Yellow up 30 to 40mm of rain is expected, but larger totals are possible on high ground.

The forecaster says Wednesday will be 'very wet' with the heaviest of the rain again over Leinster and Munster, with flooding.

While it will be mild over southern and eastern areas at first Wednesday, temperatures of just 5 or 6 C will extend countrywide in the afternoon and evening. Windy in the southeast with strong and gusty southerly winds, but winds moderate to fresh west to northwesterly elsewhere.

The outlook after the heavy rain is for freezing conditions to set in on Wednesday night as a polar front extends nationwide.

Met Éireann says Wednesday night will turn cold everywhere as temperatures fall to near freezing in the early part of the night, lowest overnight temperatures zero to plus 3 degrees, coldest in the north.

The winds will become cyclonic variable in the north as an area of low pressure, called a "polar low," tracks over or near the north of the country.

To the south of the low pressure centre winds will be strong and gusty from a southwesterly direction, later veering west. There will be showers too, likely to be heavy and falling as snow over the hills and mountains.

Thursday will also be a cold day with strong westerly winds gradually easing. There will be showers, mostly confined along western and northern areas and also some for a time over north Leinster, again some will be wintry over hills and mountains. Temperatures during the afternoon will range just 4 or 5 degrees in the north to 7 or 8 degrees in the south.

On Thursday night temperatures will fall to between minus 2 and plus 3 degrees with ice forming on untreated surfaces. Snow and hail are on the cards with wintry showers in coastal counties of the West and North.

Friday will be cold with light variable winds becoming west to northwest in direction. Showers are expected all along the west and north, turning wintry at times, but staying confined to coastal areas, elsewhere will be mostly dry with sunny spells.

Saturday will be cold with moderate west to northwest winds and wintry showers on west and north facing coasts, but mostly dry elsewhere with sunny spells.

Sunday will be mainly dry and cold with rain likely to move in from the Atlantic Sunday night and Monday.