Three Laois Gardaí who put their lives on the line for the country and the family of another officer who made the ultimate sacrifice during the Troubles will finally be honoured by the State next month.

Jim Cannon, Tom Peters, Ben Thornton, Gerry Bohan and the family of the late Michael Clerkin learned today (October 27) that they will be presented with the Garda Síochana Scott Medal for Bravery at the Templemore Garda Training College next month.

Laois Offaly Division Garda Chief Superintendent John Scanlon informed the survivors, their families and the Clerkin family that the medals would be presented in early December.

The presentation ceremony takes place more than forty years after the four men were blown up in an IRA bomb at Garryhinch on the Laois Offaly border.

Garda Clerkin, just 24 at the time, was killed while his colleagues all suffered varying degrees of life changing injuries.

Poignantly, the Minister for Justice Charlie Flanagan will represent the State at the presentation. The men were called to the scene after getting a warning that an IRA gang was planning to assassinate his late father and former minister and TD, Oliver J Flanagan.

"I will be present at the ceremony. It's long overdue. These brave men put their lives on the line in protection of my family. I personally regret that it has taken 40 years for this to happen. Credit to former Commr Noirin O'Sullivan and Chief Superintendent John Scanlon," Minister Flanagan told the Leinster Express.

Chief Supt Scanlon was pleased that the medal will finally be awarded.

"I am delighted that these men are to get the Scott Medal. It is richly deserved and long overdue," he said.

Jim Cannon, a former garda sergeant, is looking forward to travelling to Templemore on Friday, December 8 when a new batch of Garda recruits graduate.

"I'm delighted. Lately I was thinking if they don't tell us the date soon, we'll be all dead," said the Galway native who still lives in Portarlington.

The sergeant had a narrow escape when a 100lb IRA bomb killed Michael Clerkin on October 16, 1976. All the men suffered varying degrees of life changing and in one case devastating injuries.

The campaign for the award of the Medals was reignited in 2016 prior to the 40th anniversary mass for the dead garda. The case was taken up by Laois Offaly Gardaí, Chief Supt Scanlon and Garda Scanlon.

In the run up to last year's Mass Jim Cannon reignited the campaign when he retold his story to the Leinster Express.

He was the Sergeant in Charge in Portarlington when a caller reported suspicious activity in a vacant house in Garryhinch, six kilometres from the town.

“There was a phone call to Portlaoise Garda station. It said suspicious activity was taking place in Galvin’s vacant house in Garryhinch. The Emergency Powers Act was to be signed that day or night and they mentioned that there was a threat on the life of Oliver J Flanagan. I got a phonecall, I was sergeant in charge at Portarlington,” said Jim.
Jim immediately organised his colleagues to go to the scene to investigate.

“Gerry Boyhan, Michael Clerkin and myself were in the patrol car. We got a message from Portlaoise to await the detective branch members. So at about 11.40am on October 15, Tom Peters and Ben Thornton, the two detectives arrived in their police car to the square in Portarlington where we joined them. We drove to Garryhinch.

"When they arrived at the house, down a boreen, it was in complete darkness. We searched around the house and then decided to look inside it. So, myself, Michael and Gerry went to the back of the house and Tom and Ben went to the front door.

“One of the windows at the back door was open. Michael Clerkin went in the window. The next thing was, after a couple of seconds, the whole house went up.

“Gerry Boyhan and myself were trapped at the back wall under six feet of rubble. Stones blown up into the sky were falling down on top of us. I got a few in the face and head. We were trapped.

"When the dust settled Garda Boyhan was able to move. Gerry was able to release himself after some time. Then
he tried to get me out but failed. There was too much stuff over my body. So he went off looking for assistance from the neighbours.

“At that stage my left hand, leg and ankle were all covered. I tried to remove some of the stuff with my right hand. I got out eventually and went around to the front of the house,” he said.

“I heard moaning but there was no sign of anybody. But I  was able to pinpoint where it was coming from and it was Tom Peters. I removed all the debris and stones off his head so that he could breathe.

The other four also suffered varying degrees of injury, the effects of which they still suffer to this day.
“Gerry Boyhan’s face was all broken up. Ben Thornton got a fierce going over. My ankle, 40 years on, is still throbbing. My left leg and back suffered lifelong injuries. Up to this day I am taking medicine. The others the same. No one ever recovered.

“It was a miracle that we weren’t all killed. Garda Clerkin was killed instantly. At the inquest later in Tullamore he was only identified by his signet ring. Michael Clerkin was only 24,” said Jim.

Jim Cannon suffered injuries to his head, back, hands eyes and both his legs and continues to receive medical attention. To this day he lives with constant pain in his legs back and head. He retired in 1994 and lives in Portarlington. 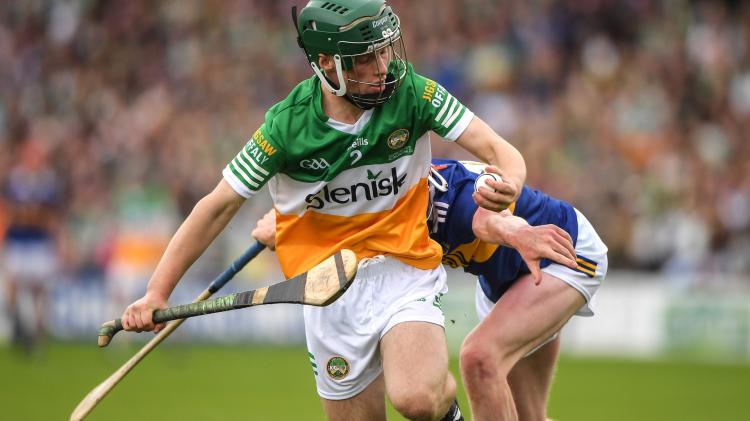