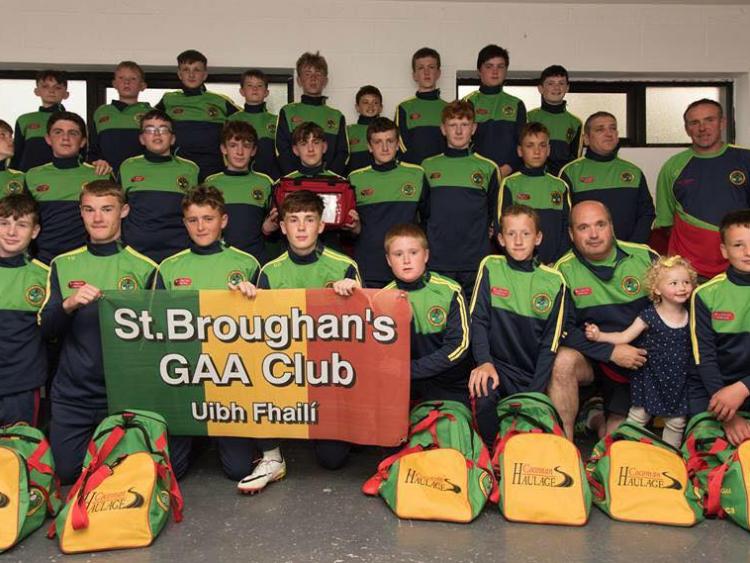 Offaly U14 Feile team slapped with €1,000 disciplinary fine from GAA

The GAA has handed a juvenile GAA team from Offaly a €1,000 fine for their part in a protest at the U14 National Feile nÓg competition at Kingspan Breffni Park in Cavan in June of this year.

The St. Broughan's club from Offaly had claimed a score mix-up cost them in their Division 1 Shield Final as it appeared a legitimate point for Broughan's was ruled out towards the end of the game with Gowna of Cavan.

The point would have resulted in a draw and extra time, but was never registered on the scoreboard or by the referee and at the final whistle, Gowna were declared the winners by one point on a scoreline of 3-8 to 3-7.

St. Broughan's players and officials protested vehemently on the day and stayed on the pitch for a period of time to vent their frustration at the perceived injustice.

The club launched an official complaint to the GAA but after a Croke Park meeting in July, the decision of the referee on the day, Cavan's Noel Mooney stood, and their objection was not upheld.

St. Broughan's had been forced to accept the result although they insisted it was wrong, but in September, they received further unexpected correspondence from the GAA.

In a letter on GAA headed paper, the Feile secretary informed St. Broughan's of disciplinary action being taken against them.

The letter informed the club that their protest after the game in question with Gowna contravened rule 7.2 (d) (3) of the GAA, relating to "disruptive conduct by players, team officials or supporters."

Further to this, a report seen by the Offaly Express from a fourth official on the day in Kingspan Breffni Park, insisted that, "after the game; a number of St. Broughan's supporters came on to the pitch in an aggressive manner, approaching match officials regarding the final score of game."

The disciplinary letter stated that the notice was being given "on foot of the referee's report." The Offaly Express has seen the referee's report of the game, and an addendum clarifying the score issue supplied by him, and neither document makes reference to a pitch infraction from any team officials. The only mention of it comes in the fourth official's review of proceedings.

The Feile letter to St. Broughan's went on to state: "Having regard to the applicable rules, the referee's report, your record, and its powers pursuant to rules 7.3 and 7.7 T.O. 2016, the Féile Competitions Control Committee hereby notifies you of the following Proposed Penalty: Fine of €1,000 payable by October 31, 2017."

St. Broughan's believe this action by the GAA is "vindictive" and they have enlisted the help of a solicitor who has now written to the GAA to request it drops the action against the U14 outfit and their officials.

The disciplinary action provided St. Broughan's with two options - to accept the proposed penalty or request a hearing before the Hearings Committee.

The Offaly team have chosen to object once more and are due to appear before the Hearings Committee on Thursday, October 19.

We will bring you the latest on this story as we get it.