Festival will take place in Tullamore this November 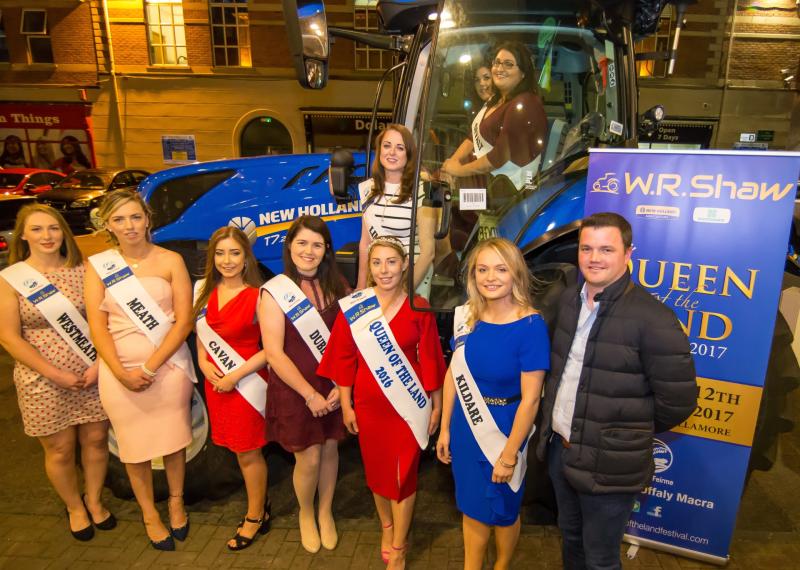 Some of the 2017 W.R. Shaw Queens with Karen Elliffe, reigning Queen of the Land and the main sponsor W.R. Shaw representative Leslie Shaw

This year's W.R. Shaw Queen of the Land Festival has been officially launched in Tullamore and 31 ladies will be vying to be crowned this year.

Founded in 1964 the festival has gone from strength to strength and this year’s 53rd festival will be no exception. A fantastic programme of events is planned for the 2017 W.R. Shaw Queen of the Land Festival which was officially launched in the Bridge House Hotel on Friday.

This year’s festival features 31 ladies contending for the prestigious title including international representatives from Scotland, England and Northern Ireland. The festival will attract visitors from all over the country and beyond to Tullamore on the weekend of Friday, November 10 to Sunday, November 12 .

This year’s judges are Karen Elliffe, reigning W.R Shaw Queen of the Land 2016, Billy Shaw, representative of W.R. Shaw and guest judge Deirdre O’ Shea, Executive Director of Agri Aware. The MC for the weekend is Midlands 103's Will Faulkner.

Speaking at the launch the Chairman of the Committee, Ger Mahon commented, “we are delighted to have W.R. Shaw back as the main sponsor of this year’s festival and we sincerely extend our gratitude to them for their continued support and commitment to the festival.”

He added, “we are also pleased to have the Irish Farmers Journal and Country Living on board again this year as our media partners and we also sincerely thank them for their coverage of this year’s festival. In addition, we would like to thank all of our associate sponsors for their generosity, support and loyalty to our festival.

“The committee has worked very hard to ensure that the 2017 W.R. Shaw Queen of the Land Festival is the best yet with an action-packed weekend featuring a fantastic line-up of entertainment for this year’s festival guaranteed not to disappoint.”

Kicking off on Friday, the festival will have the official opening at the Bridge House Hotel from 7pm, with doors opening at 9.30pm for International DJ act Sash.

Saturday features the introduction of the Queens to their escorts for the weekend in Hugh Lynch’s Bar at 3pm which is followed by the highly anticipated on-stage interviews with the Queens from 7pm with Will Faulkner. This is then followed by music from Transmitter, Legacy and Joe Wynne and a disco afterwards.

The main highlight of the festival weekend is guaranteed to be the glamorous Gala Banquet on Sunday night, with music by White Diamond and the crowning of the 2017 W.R. Shaw Queen of the Land at midnight.

The schedule for the weekend is as follows:
Friday 10th November
12pm Queens depart for tour of Clonmacnoise & Tullamore Dew Heritage Centre.
7.00pm Official opening Ceremony of the W.R. Shaw Queen of the Land Festival 2017 in Bridge House, Tullamore.
9.30pm International DJ Act Sash in the Palace nightclub. Entry €10, payable at the door.