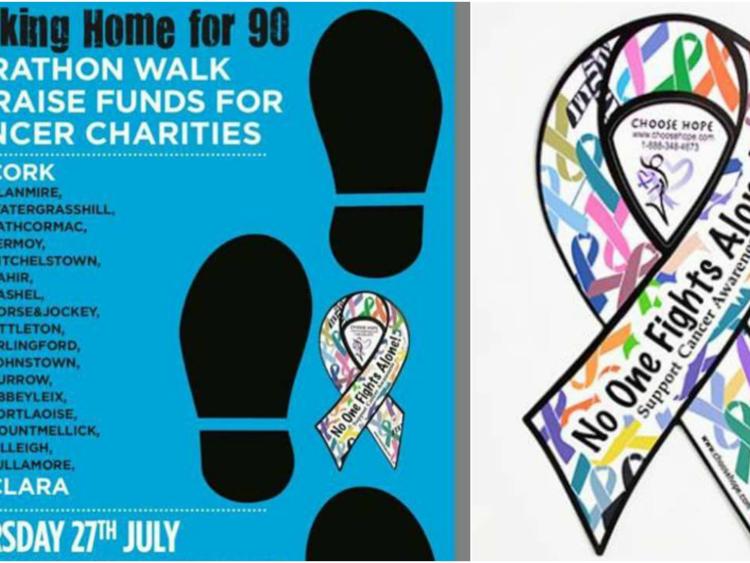 An Offaly man has decided to walk 217km from Cork to Clara to raise funds for cancer care in Tullamore, Cork and the UK.

Stephen Kelly has taken on the mammoth task because his family has once again been touched by cancer in recent years. "Many years ago my dad, at the young age of 54, died from cancer, leaving my mam to bring up a young family of 8 on her own," he explained.

"Roll on the years to 2016 and my brother Kevin Kelly, manager of the GAA Club in Ruislip, London, was diagnosed with a Grade 4 Glioblastoma Brain Tumour, and he found out this news on the day of his 54th birthday," Stephen added.

"I have decided to do my bit to help kick this horrible disease over the end line." Stephen explained that his beloved mother, "the great lady that she is," will celebrate her 90th birthday on July 27. "I have decided to walk home to celebrate it with her," he quipped.

Stephen is going to walk from Cork to Clara in a charity event called, Walking Home for 90, and aims to raise a lot of money along the way. "I want to raise money for hospitals in Cork, Tullamore and the UK who looked after my brother Kevin so well, and other various cancer charities," he said.

Given that Stephen's brother is a well known name in GAA circles in London, he is appealing to GAA clubs especially, and is asking them to donate €1 for each kilometre of the journey, which is 217km from start to finish."I am sure at some stage many clubs have brought juvenile teams or even senior teams to Ruislip and I can guarantee that you were well looked after by my brother, Kevin," Stephen remarked.

Stephen is also appealing to the general public, saying that "any donation would be greatly appreciated." Collection boxes will be placed in pubs and shops, sponsor cards will be available and there will collection buckets along the route as he walks through the towns.

"Sure, if you any of you feel like walking a few miles with me, you will be very welcome," Stephen concluded. The walk takes place on July 27. He will walk through Killeigh and Tullamore on his way home to Clara.

The Walking Home for 90 event has a GoFundMe page where you can donate to Stephen's cause. You can do so by clicking here.