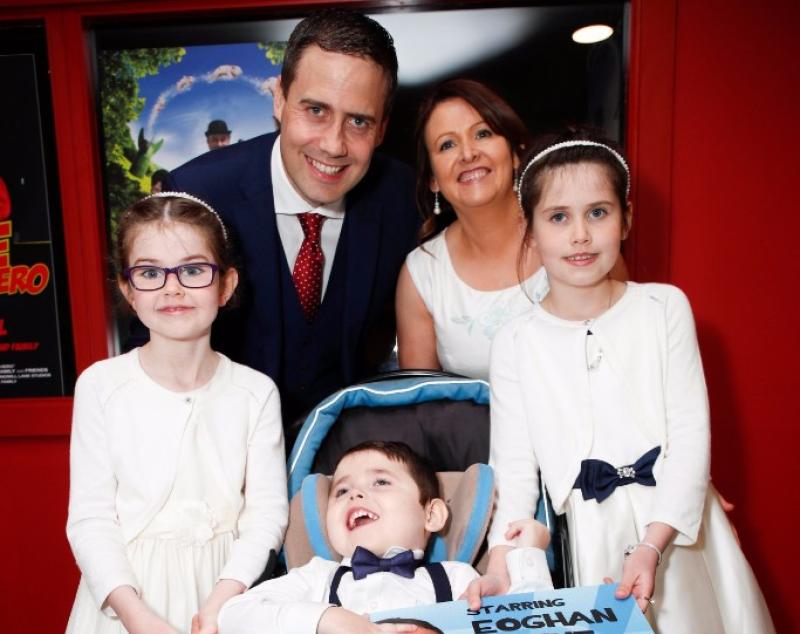 Pictured at the LauraLynn Oscars Ceremony at the Odeon cinema, Charlestown were Ronan and Teresa Dunne from Tullamore with their children Eoghan (age 5), Keelin (age 9) and Ciara (age 7).

The HSE's Saolta hospital group has apologised to the Offaly family of Eoghan Dunne for failures in care delivered at Portiuncula Hospital in Galway. The 5-year-old from Ballinagar was left severely brain damaged having been referred to the hospital with a fever in 2012.

The apology is included in a report from a review of his care which was given to the Dunne family in recent weeks.

After arriving at Portiuncula Hospital with a fever in August 2012, a then 11-month-old Eoghan Dunne's condition deteriorated rapidly over a 12-hour period.

He developed sepsis, suffered cardiorespitory arrest and multi-organ failure resulting in severe brain damage, meaning he requires 24-hour care for the rest of his life.

An internal hospital review assessing Eoghan's case was conducted but his family were unaware of the review until five months after it was completed when it was delivered without warning to their home by registered post in February 2015.

The Offaly boy's parents, Ronan and Teresa Dunne, then set about fighting for an independent investigation of their case. However, correspondence which came to light thanks to an RTÉ investigation, revealed that the Saolta Group initially refused, saying "a comprehensive review" had already taken place.

Following further efforts by the Dunne family, the Saolta hospital Group eventually agreed to an external review in May 2015. In recent weeks, Eoghan's parents have been issued with the findings of that report. It identifies a number of significant failings, including a failure to recognise sepsis and a failure to pass over Eoghan's care to a more senior decision maker at the hospital.

The review also found "little consistency" in record keeping in Eoghan's case and indeed, a number of documents from Eoghan's file cannot be located, including medication sheets and theatre notes. The review made 14 recommendations - all of which have either been implemented or are in the process of implementation, according to Saolta.

This review also includes an unreserved and full apology to the Dunne family for the failures in care that resulted in Eoghan's significant needs.

Eoghan's parents took a case against the HSE, but settled the High Court action last year with an interim payout of €2.4m.