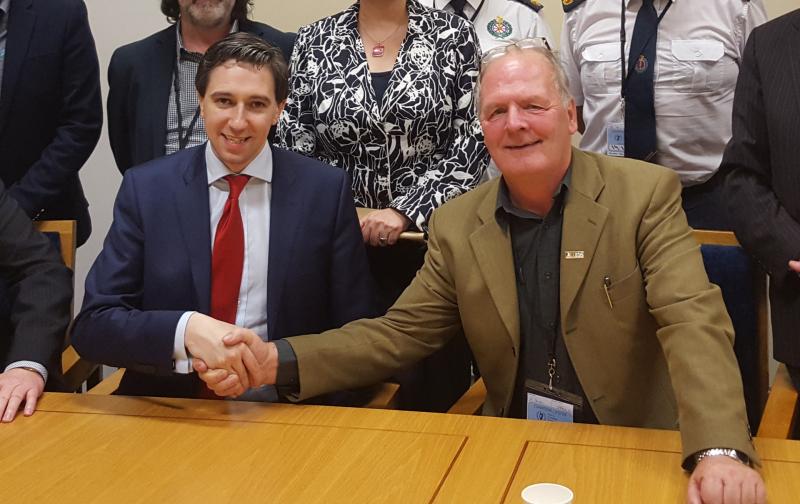 It is 12 months since Offaly County Councillor Noel Cribbin was elected to the position of Cathaoirleach of the Edenderry Municipal District. Ahead of their June Municipal meeting, Cribbin has been reflecting on the last year in Edenderry, and has said, "it's been a busy year for the town."

"For me personally it was a great honour and privilege to be in the Chair and I would like to thank my fellow councillors, staff and the media for the respect they held for the Cathaoirleach during my term," Cribbin said.

He expressed satisfaction with the way in which the town group worked well together and that all decisions made were "always for the greater good no matter what part of North Offaly we were discussing."

"Indeed our fund for community groups and projects was evenly dispersed throughout the area," he commented.

Noel said the highlight of the year for him was when all six local councillors met with Minister for Health Simon Harris in his office in the Dáil and shook hands with him on his commitment for a €2 million Ambulance Facility, a promise the Minister kept as the build is now well underway and on schedule to be finished this year.

The outgoing Cathaoirleach also recognised the final approval for 33 new council houses, which are now at tender stage, as a massive positive from his year in charge. "Also, the derelict hotel site is to be taken over by the VEC with the intention of building a new school for the teachers and pupils of Oaklands Collage and great credit must go to all involved, both local councillors and officials on all sides for this great outcome," Cribbin added.

Cribbin balanced his role as Cathaoirleach for the year with that of an Independent councillor, and says that he is glad to say he had very positive outcomes helping those with "planning applications, housing and only lately, helping to house two young homeless families."

"During the year I also made hundreds of requests for groups, individuals, clubs, and so on, for housing, grants, applications forms, planning applications, road and public lighting issues, HSE and Social Welfare issues. "I was glad to be of help to all who came to me for assistance," Noel remarked.

Noel Cribbin is also heavily involved in a number of local clubs and committees, and this year he has been very busy with Edenderry Tidy Towns on numerous projects. In recent weeks they received a grant of €5,000 from Edenderry Municipal members towards the cost of the new flower planters and murals that have been springing up across the town.

"All our hard work is paying off and with the adjudicators for the National Tidy Towns due any day soon, let's hope they think the same, resulting in higher marks than ever, and I thank all committee members for their great efforts and to the local CE scheme workers, businesses, resident groups and the people of the town for your continued support," Cribbin stated.

During Noel Cribbin's term as Cathaoirleach, the town was also successful in a joint project with the Edenderry Historical Society in securing a grant for an Audio App of places of historical interest in the town. A grant of €4,000 has been allocated to the project, and Cribbin expressed great thanks to Dr Ciaran Reilly for all his help with the initiative, which is due to be rolled out in the coming weeks.

The playground in Edenderry as been a big part of Cribbin's term, and he recognised the work done by their small but dedicated committee of just four. "We hope to run our main fundraiser, the famous 'Duck Race,' with more activities for this year and all details are set to be announced in the coming week."

Just a few short months ago, Noel Cribbin called a public meeting to discuss the possibility of a theatre and arts centre in Edenderry. It now looks likely to go ahead, and Cribbin is to the forefront of the idea, and is hopeful of it coming to fruition, something he says would provide a "hugely important facility" for Edenderry library and the arts under one roof.

The Edenderry Community & Arts Centre group is holding its first AGM on Monday, June 12 at 8.30pm in Byrne's Pub, and all are welcome. "We are all hugely committed to working alongside officials in Offaly County Council and the Department of Arts in trying to secure funding that will see such a facility on JKL Street in the coming years."

Issues surrounding water has been a major backdrop to the last few years, both politically and locally, and Noel Cribbin hopes to use the fact that  Irish Water intend to pipe water from the Shannon river in Tipperary to Dublin, the entire length of Offaly, to the county's benefit.

Noel put a proposal to both Eriva, the organisation responsible for not only Irish Water but also Bord Gáis and broadband, as well as Bord Na Móna, that the pipeline should also include connections to both gas and broadband and that spurs come off for both Tullamore and Birr.

"I also made the suggestion that a spur off the pipeline would go to both Rhode and Derrygreenagh and by doing so, bring water, gas and broadband to the Rhode grid connection, adjacent to green energy from the windfarms and possible solar panels in the area," he explained.

Cribbin believes this proposal would then put both areas of Offaly and Westmeath "front and centre" for heavy industry in Ireland. "I feel very strongly that this proposal has great potential for the entire county of Offaly and it's a project that I intend to push strongly in the coming months and hopefully bring both jobs and prosperity to this area, which has been overlooked for years."

Noel Cribbin will pass the baton in terms of the position of Cathaoirleach in Edenderry in the coming weeks, but there is no doubt that the work continues for a man who is a real stalwart in the community.

"Whilst the last year has flown by I intend to work twice as hard for the coming year and I will move heaven and earth to get both the Arts Centre and Water Pipeline projects up and running and bring some hope, jobs and prosperity to the area, Cllr, Noel Cribbin concluded.