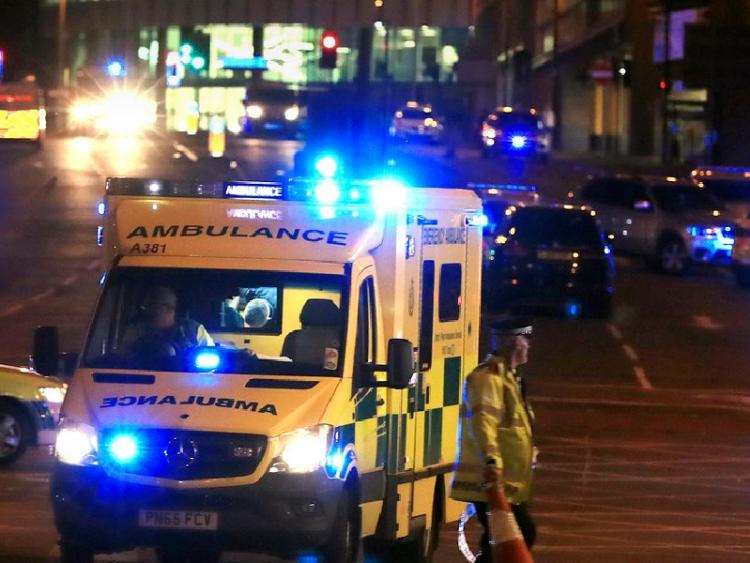 Cian Slevin has been giving a harrowing account of being caught up in the terrorist bombing that killed 22 people at an Ariana Grande concert in Manchester on Monday night.

Offaly man Cian Slevin has been speaking about his experience with his young sister Finadh at the Ariana Grande concert that was the centre of a terrorist bombing on Monday night. Speaking to Midlands 103, Cian described standing in the lobby of the MEN Arena when the explosion rocked the popular concert venue.

Cian Slevin, the son of Ken and Brenda Slevin from Edenderry, had treated his younger sister to Ariana Grande tickets after realising he would be away in America working for her birthday. He said he "felt bad" so tried and failed to get tickets for her Dublin show last weekend before securing tickets for Manchester.

Cian said everything had gone seamlessly on the way over from the airport to collecting the tickets, and described the concert as a "great show," adding that he had never seen so many people so happy. "It was just little kids with bunny ears and Ariana t-shirts," Cian said.

The 22-year-old continued to tell Will Faulkner that the concert ended around 10:30pm and he began walking toward the exit. "I told Finadh not to let go of my hand because their was 20,000 people there," he said. As the pair made their way through the lobby of the MEN Arena, Cian describes hearing the explosion.

"I initially thought it was one of the balloons released at the end of the performance popping, but soon I realised it was an explosion and people started screaming and running towards me shouting, get out, get out, get out."

The brave brother said his first and only thought at that point was "getting Finadh out" as panic ensued inside the venue. "People were screaming, crying and there was even people getting trampled in front of me," Cian explained.

Trying to protect his sister from the horrifying incident, Cian told the 9-year-old that a light had blown and that "people had just got a bit of a fright." Cian and Finadh made their way out onto the street and Cian said he saw a sign for a Travel Lodge, and immediately decided to go there to make sure his sister was safe.

"A lot of people ended up there and people were in pieces, trying to find people and taking in the chaos." "Even though I was just two minutes away from the arena, I still didn't know what had actually happened," he added.

Meanwhile, at home in Edenderry, Cian and Finadh's mother Brenda had received a text saying the concert had ended and that they were making their way out of the venue. "In the text, Cian also told his mother that there'd been some sort of explosion but not to worry."

It was at that point the family lost contact when Cian lost phone and internet coverage in the Travel Lodge as Brenda and husband Ken followed the developing story on Sky News. "We couldn't get through to them after that text but we knew they were out," Brenda said. "We managed to get through to the hotel they were checked into in Manchester but all they could tell us was that they hadn't arrived back there yet."

Brenda said news was slow to filter through and that it was only described on the news as an "incident" for a long time. She described her panic at not knowing if there had been more explosions or if they had "walked into something."

It was two and a half hours later before Cian and Finadh managed to get a taxi back to their hotel and make contact with their worried parents. Ken and Brenda flew to Manchester to be with their children on Tuesday and Brenda said, "We are just so very lucky that they weren't injured or killed."

Brenda went on to say that she hasn't broached the subject of terrorism or the bombing with her young daughter, saying that she will "speak to her when they get home." She also thanked the community of Edenderry for their support and the kindness of people in Manchester when they arrived, including the Garden Hotel refusing to take money from them for checking in when they arrived to be with Cian and Finadh.

The family arrived home late on Wednesday evening after a week of real upheaval and upset in their lives. You can listen to Cian and Brenda's interview on local radio by clicking here.