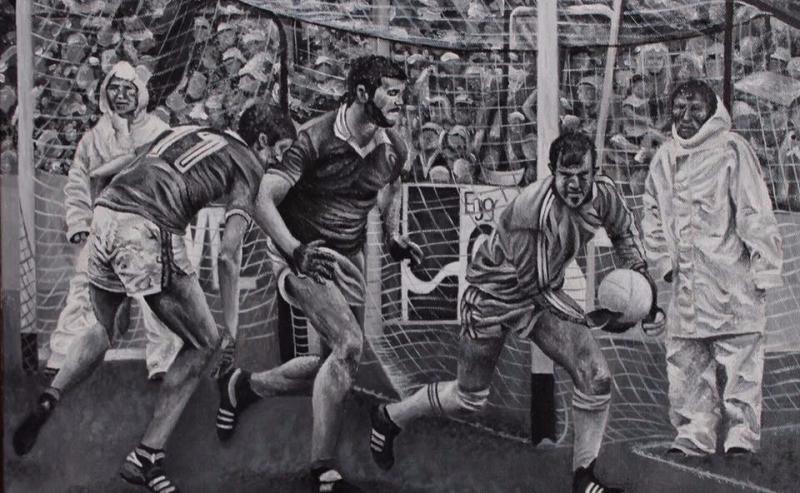 A painting based on a photograph from the famous 1982 All-Ireland final is set to be raffled as part of Offaly's Faithful Fields fundraiser in New York this summer. New York artist Claire Slattery, spurred on by her Offaly heritage and encouragement from her uncle, produced the piece which recreates a photograph of legendary Offaly goalkeeper Martin Furlong emerging with possession in that final against Kerry.

The painting will be signed by Furlong before going up for raffle at the Faithful Fields fundraiser in the Manhattan Club, New York, on June 9. Furlong himself will be in attendance stateside on the night, where he will also be joined by 1982 teammates Gerry Carroll and Matt Connor, as well as hurling great Michael Duignan.

SEE ALSO: Matt Connor is chosen as the Greatest Offaly Sportsperson Ever

Claire was inspired to create this wonderful painting by her Offaly uncle, James Keenaghan. James, who is one of the event organisers, and good friends with Martin Furlong, suggested the idea to her because he thought it was "something that hasn't really been done before," and would "expose" the talent of his niece.

"It was such a great photo that it was easy to make a great painting," Claire told the Offaly Express. "Martin was a great friend of my grandfather Kieran Keenaghan's and also of my uncles, so I'm happy to be a part of this event."

Claire is steeped in Offaly tradition as one half of her family hails from Clara. "My mom Ann Marie and her side of the family all grew up there. My grandparents names were Kieran and Mary Keenaghan," she added.

The Offaly Faithful Fields project is now less than €100,000 short (€668,000) of its funding target of €750,000, and this American event looks set to go a long way in helping the committee reach that magic number as work continues on the pitches and facilities at the new centre of excellence near Kilcormac.