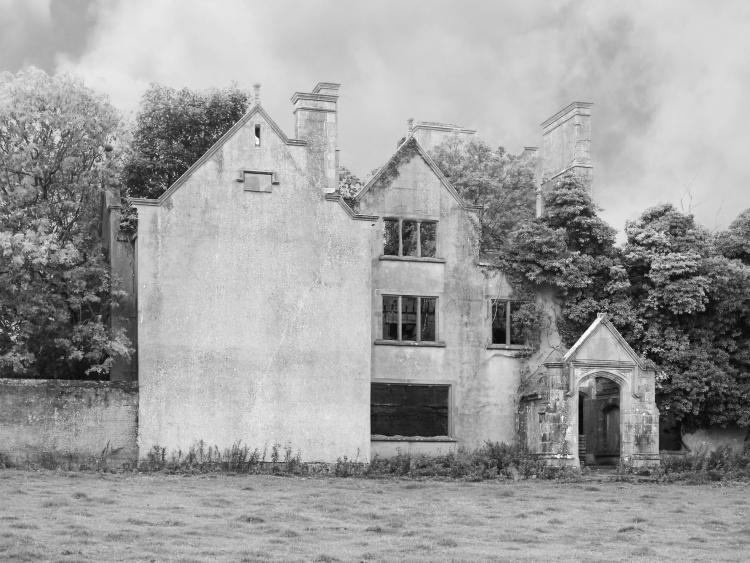 Rathrobbin House in Mountbolus a photographic by Robert Smith from the Fading Facades exhibition.

As part of the continuing schedule of centenary exhibitions in Áras an Chontae, Tullamore ‘Fading Facades’ by Robert Smith - a black and white photographic exhibition - will launch on Thursday, September 22 at 7pm.  Dr Ciaran Reilly, Maynooth University, will provide a keynote talk at the launch.

Robert Smith is originally from the UK and worked as a fire-fighter in Canterbury for 18 years. Now living in Edenderry he took up photography upon retirement and as an international canine photographer, he has had photographs published in over 400 calendars and over 300 canine books.

It was while working on a calendar in 1988 that he met Mark Bence-Jones, a writer, noted for his books on Irish architecture. Bence-Jones described the plight of some of the large ruined houses in Ireland, many of which had gone past the point of redemption.  This conversation inspired Robert to record on film some of these houses in sympathetic way to highlight these vanishing masterpieces. Due to his commitments in the canine photography publishing sector it is only now that Robert has fulfilled his promise to Mark Bence-Jones, who passed away in 2010 and he hopes that Mark would approve of the way they are presented.

Fading Facades features photographs of Ballycowan House, just outside of Tullamore, Cherrygarden House near Daingean, Rathrobin House in Mountbolus and Leipsic House. Robert hopes that the exhibition’s photos inspire young people to take notice and research the demise of these buildings around both the county of Offaly and the rest of Ireland.

This free exhibition is open Monday to Friday from 9.30am to 4pm and continues until Friday 30th September. For more information on this and other exhibitions, as well as other centenary projects, visit www.offaly.ie/2016  or call 057 93 57400.