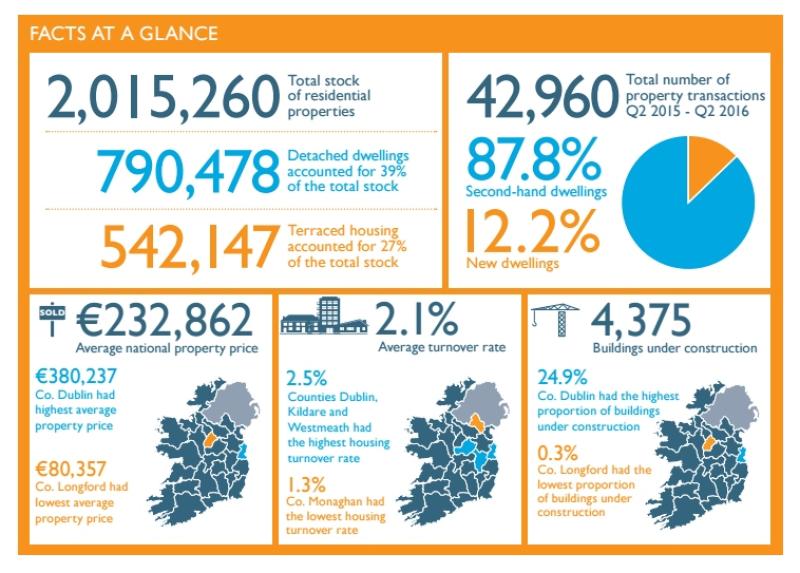 Offaly had a housing turnover rate of 1.7% between July 2015 and June 2016 according to the GeoView report published by GeoDirectory. Offaly also has a vacancy rate of 9.7%

The national average housing turnover rate for the same period was 2.1%. When Dublin is excluded the turnover rate falls to 1.5%, highlighting the Capital’s effect on the housing market.

By cross referencing the Property Price Register (PPR), the 2016 CSO Census of Population and the GeoDirectory Database, the GeoView report offers new, unique insights into the residential housing density, turnover, development and shortage in the country.

The database found that there were 2,015,260 residential dwellings across the country as of June 30th 2016. According to the GeoView report, detached housing accounted for the largest portion of this total at 39%, followed by terraced (27%) and semi-detached dwellings (23%). The level of apartments amounted to 181,213 as of the 30th June, with Dublin accounting for the largest share of this total (21.8%).

Commenting on the findings, Dara Keogh, CEO, GeoDirectory said: “By combining the GeoDirectory database with the most up to date figures from the 2016 CSO Census, we get the clearest possible picture of the Irish residential property market as it stands. We can see that market activity is still heavily concentrated in and around Dublin, with a national average turnover rate of 2.1% falling to 1.5% when Dublin is excluded. We also see a large decrease in the national average house price at €232,862 which falls to €168,078 when the Dublin transactions are excluded. Leinster also sees a lower concentration of dwellings per thousand of population, when compared with the rest of the country.”

Annette Hughes, Director of DKM Economic Consultants said: “This is the fifth comprehensive report about the residential building stock of its kind to be published in Ireland. One key statistic which the report highlighted was that the national average housing turnover rate in the year to June 2016 was 2.1%, which was slightly down from 2.2% last year and is still well below what would be deemed to be a more normal housing turnover rate of around 4 to 5%. Nationally we’re seeing an uptake in construction, however Dublin is still dominating with 25% of homes under construction located there.”

A copy of the GeoView Residential Buildings Report is attached in PDF format and is available at www.geodirectory.ie  and www.dkm.ie

·     The national average housing turnover rate in this period was 2.1%. When Dublin is excluded the turnover rate falls to 1.5%.

·     The report estimates that the turnover of residential stock was 42,960 transactions in the year to June 2016.

·     A total of 4,375 residential dwellings were classified as being under construction in the GeoDirectory Database in June 2016.