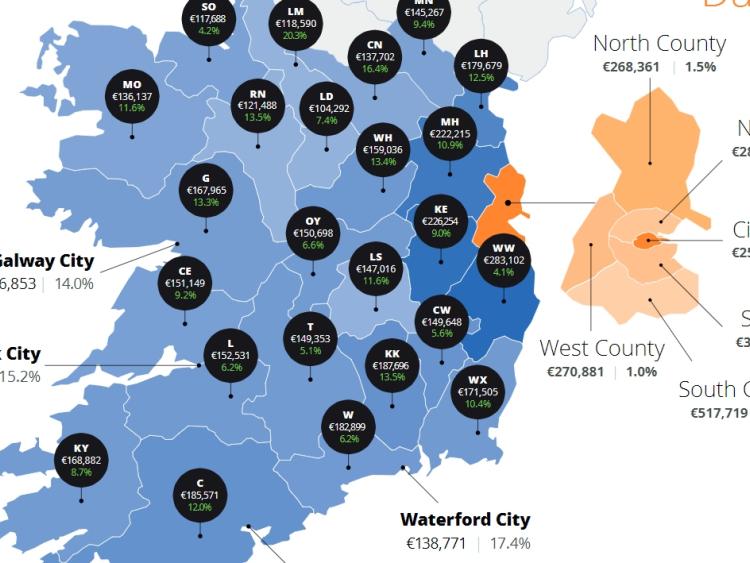 House prices in Offaly have risen by more than the national average according to the latest House Price Report released today by Ireland’s largest property website, Daft.ie

House prices rose by an average of 6.3% in the year to June 2016. The divide between Dublin and the rest of the country persists, with prices effectively stable in the capital – rising just 1.1% in the last year – compared to a rise of 10.2% on average outside Dublin. Compared to three months ago, there has been a slight uptick in inflation outside the capital.

While prices are stable in Dublin, they continue to increase strongly in other cities. Compared to the same period in 2015, prices in the second quarter of 2016 were 11.2% higher in Cork and 14% higher in Galway. In Limerick city, the increase was 15.2%, while in Waterford prices rose by 17.4% in 12 months. Inflation outside the cities varies from 9% in Munster to 12% in Connacht-Ulster.

Commenting on the figures, Ronan Lyons, economist at Trinity College Dublin and author of the Daft.ie Report, said: “While supply pressures have eased slightly in the last three months, the overall dynamic in the housing market currently is one of very strong demand pulling up prices. In Mayo and Roscommon, for example, average prices have increased by roughly 10% since the start of the year."

“The obvious exception to this is Dublin, where Central Bank rules have linked house prices to the real economy. What we are seeing in the capital is buyers seeking out good-value locations. Whereas prices are now falling in year-on-year terms in markets like Dublin 6 and South County Dublin, they are rising by roughly 5% a year in areas like Dublin 10, Dublin 11 and Dublin 12.”