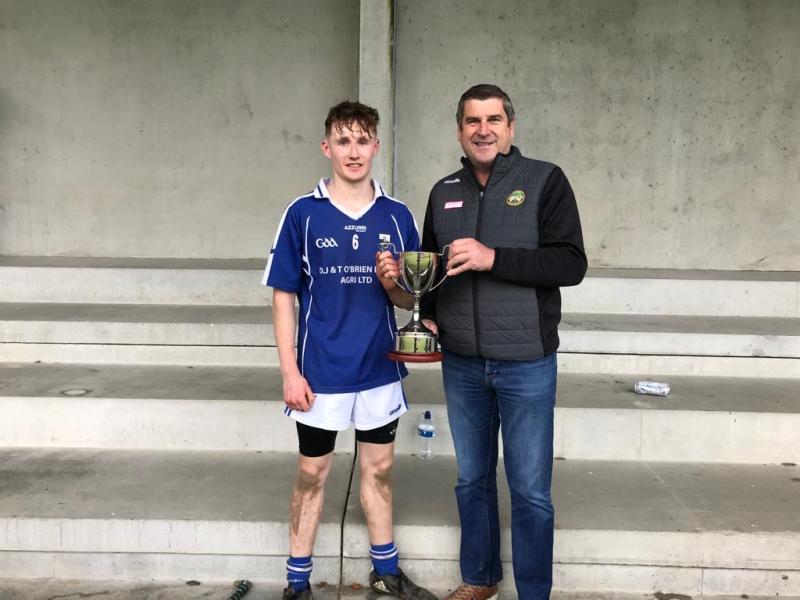 SEVEN points down with three minutes left, Carrig & Riverstown staged a dramatic late recovery to snatch victory from Birr with a point four minutes into injury time after an exciting Offaly Junior B Hurling final in Kinnitty on Sunday.

In a see saw game in which fortunes swayed one way and then the other, Carrig & Riverstown struck late with 2-2 to overturn Birr's advantage and claim victory in the most dramatic of fashions.

The first half was close with never more than a couple of points between the sides and the lead changing hands on five different occasions. Carrig & Riverstown led by two points at the break and when they found the Birr net to stretch the lead to five points two minutes into the second half they looked to have taken a grip on the game.

However over the next 23 minutes, Birr outscored their opponents by 1-10 to 0-1 to lead by seven points heading into the final stretch and looked to be on their way to the title but Carrig & Riverstown never gave up and Matthew Power hit 2-2 in the remaining minutes, 1-2 from frees, to snatch victory and signal great scenes of jubilation at the final whistle.

Carrig & Riverstown must take great credit for never giving up when the game seemed to be slipping away from them. They just kept plugging away and had a goal effort from a 20m free saved shortly before Matthew Power drove a similar effort to the roof of the net to ignite their recovery and with the wind in their sails they ran at Birr with great effect and their efforts were rewarded with those late scores.

Birr will wonder how they let this game slip from their grasp. Having gone five points down early in the second half, they responded magnificently and were level five minutes later. They pushed on from there, playing their best hurling of the hour, and opened up that seven point lead. They did have opportunities to stretch that even further but they hit three wides in quick succession shortly before Carrig & Riverstown's goal and those misses ultimately proved costly.

The sides were level eight times over the hour and the excitement in the closing stages reached fever pitch as both sides had chances to win it but, at the death, it was Carrig & Riverstown who came up with the crucial score to seal the title.

Both sides had a good mix of youth and experience, with a couple of All-Ireland senior medal winners lining out on either side, Ger Oakley for Carrig & Riverstown and Barry Whelahan and Simon Whelahan for Birr.

Chris Kelly, James Nolan and Rian Digan-Sullivan played very well in the Birr defence, Max Boyd worked hard in the middle of the field and Aaron Whelahan, Keelan O'Brien and Sean T. O'Connor were best in attack for Birr.

Daniel England opened the scoring with a Carrig & Riverstown point after just 15 seconds. Aaron Whelahan levelled from a '65' but Ger Oakley and Matthew Power restored Carrig & Riverstown's lead. Aaron Whelahan with two (one free) and Sean T. O'Connor saw Birr take the lead for the first time after eight minutes. Devon Beale pulled off a terrific save from Andrew Carney before Sean T. O'Connor stretched the Birr lead.

Two minutes into the second half Shane Collins and William Gleeson combined to set up Matthew Power and he netted from close range. Aaron Whelahan pointed two frees and then when Rian Digan Sullivan's high ball wasn't dealt with by Leonard Deane, Aaron Whelahan forced the ball over the line to bring the sides level again.

Aaron Whelahan and William Gleeson exchanged points from frees and they were still level 10 minutes into the half. Birr then pushed on and Aaron Whelahan pointed four frees while Keelan O'Brien, Conor Grimes and Rian Digan Sullivan also raised white flags to leave Birr seven points up with five minutes to go.

Two minutes later Carrig & Riverstown won a 25m free and Matthew Power drilled it to the roof of the net and quickly added another point from a free. With the game just ticking over the 30 minutes Matthew Power went on a solo run and fired a low shot to the corner of the net to level the game.

Birr had a chance from a free but Aaron Whelahan's effort from near the right sideline was wide. Then when Cathal Hanlon delivered a high ball towards Ger Oakley, he was fouled and Matthew Power pointed the free four minutes into injury time to win the game for Carrig & Riverstown.

Matthew Power's third goal on 60 minutes was the moment that really swung the game back in Carrig & Riverstown's favour and it was a great score as he careered through the Birr defence before striking a low shot to the corner of the net.

Sean Michael Maher dealt with the game well. He was up with the play at all times and didn't have too many serious issues to deal with. The one real outbreak resulted in a yellow card for either side and he ensured the incident didn't go any further.

Carrig & Riverstown's dramatic comeback. They had only scored 1-1 in the first 27 minutes of the half but added 2-2 in the final minutes and Birr were left pondering how they let a seven point lead slip with so little time left in the game.

It's the end of the season for both sides with Carrig & Riverstown celebrating victory and a move up to Junior A next season, while Birr must regroup and look to go again in 2022.

The Kinnitty venue was in good nick for the game. The pitch was a bit soft in places and players seemed to have difficulty picking the ball at times but overall for the time of year, the pitch was in good order. The club had plenty of stewards on duty to control parking and traffic with a big crowd present.