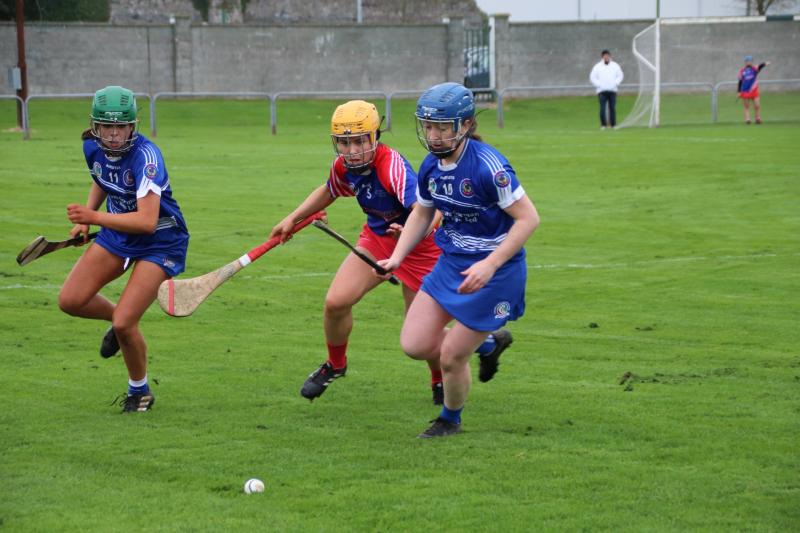 They say you have to “lose one to win one” and whether or not that is actually true, Tullamore went some way to making amends for losing last year’s final when they won the Offaly Camogie Intermediate Final on Saturday afternoon.  They finished off an excellent week for the town when they followed the ladies football team’s win in the Senior Football Final to win the Intermediate Championship which they can add to the Division 2 League title they won earlier in the year.

While obviously disappointed by the defeat, Lusmagh/Drumcullen can take some solace in the knowledge that 2022 will see them return to the senior ranks, as the County Board increase the number of teams playing in next year’s Senior Championship.

The build up to the final was not all plain sailing for Offaly Camogie with the match originally scheduled to be played in St Brendan’s Park in Birr as part of a double header with the Birr/Shinrone Senior Semi Final.  However, it was deemed that the pitch in Birr was struggling to cope with the volume of matches being played there and as a result the Intermediate Final was moved to Crinkle.  On the day the playing surface in Crinkle was in immaculate condition but unfortunately for both teams the same could not be said for the weather with a strong wind blowing across the pitch that was never going to favour either team and only minutes after Declan Cooke started the game the rain started to fall and continued all through the match.

It was Lusmagh/Drumcullen that opened the scoring when Ann Marie Guinan hit over in the first minute.  Tullamore responded swiftly when Becky Bryant celebrated her return to the team starting line up for the first time this year when she levelled the scoring.

The teams traded points until just after the first half water break but only minutes after the break Becky Bryant hit a goal and 2 points in the space of 2 minutes to open up 5 point lead for Tullamore with the scoreboard reading 1-6 to 0-4.  Lisa Gorman converted 2 frees and Tullamore now really flexing their muscles against the young Lusmagh/Drumcullen team.  Leah Gath did her best to stem the flow by hitting over 2 points before the break as the teams broke for some words from their respective coaches.  No doubt Tullamore will have used the hurt of last year’s defeat to remind their team that there was no room for complacency as they went back out for the second half.

When play resumed Gath picked up when she left off and started the second half by adding another point for Lusmagh/Drumcullen.  Clodagh Leahy converted a 45 and the lead was now reduced to that Bryant goal.  Two Lisa Gorman points sandwiched another point by Gath and in the 14th minute a goal mouth scramble ended up with Charlotte Queegan helping the ball over the Tullamore line and there was just a point between the teams.

Lusmagh/Drumcullen had their chances to equalise but they did not take advantage of them and two pointed frees and a point from play by Lisa Gorman and a point from Sarah Walshe in the space of 4 minutes gave Tullamore some breathing room.  With the clock ticking down Becky Bryant added to her team’s lead before Caoimhe Darcy pointed for Lusmagh/Drumcullen but that was to be their final score of the game.  Tullamore did add another point to their tally before referee Declan Cooke blew the final whistle to send Tullamore into dream land and confirm them not only as Offaly Camogie Intermediate Champions for 2021 but also see them undefeated for the year.

Sarah Walshe was awarded Player of the Match by Nicholas Lalor of HQ Physio before Chair of Offaly Camogie, Robbie Bergin presented the cup to Tullamore Captain, Aisling Feeney.