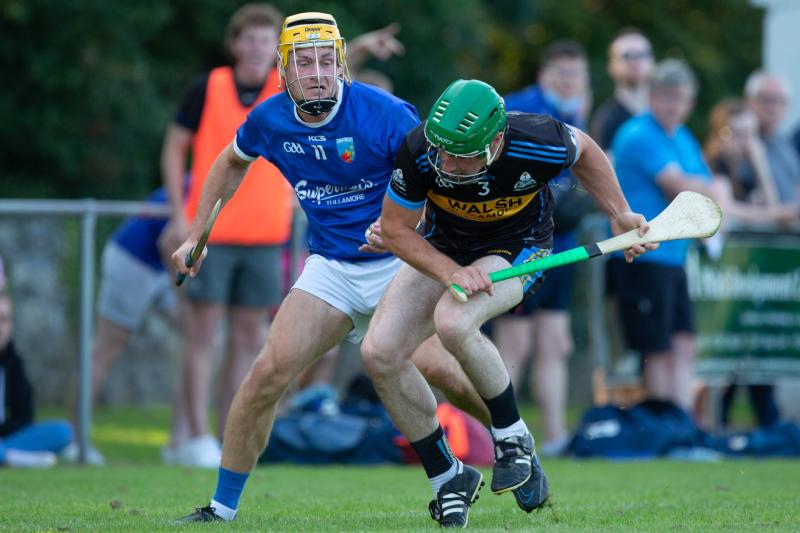 Tullamore and Clodiagh Gaels are in the SHC "B" semi-finals.

THERE was no shortage of drama and tension when the closing round of group games took place in the Offaly Senior “B” Hurling Championship on Sunday afternoon.

With results dictating the final two semi-finalists, it was all very delicately balanced before Clodiagh Gaels and Clara scraped through to join Tullamore and Lusmagh in the last four.

Both Clodiagh Gaels and Clara found themselves on very thin ice. Clodiagh Gaels were heading for disaster when they trailed by five points, 0-13 to 0-8 in their match against Kilcormac-Killoughey. Had a fancied Clodiagh Gaels side lost that and Clara beaten Shinrone, they would have lost out to K-K under the head to head rule and been gone. As it was they recovered in the second half to draw, 0-18 each, and get through ahead of the losers.

Clara were also very grateful that Clodiagh Gaels rallied to draw as they could have lost out on scoring difference after suffering a thought provoking 3-19 to 1-16 defeat to Shinrone, who were already in the relegation play off and couldn't make the semi-finals. Shinrone were very worthy winners in Birr. They started brightly against the wind but trailed by 0-12 to 1-3 at half time. With Clara missing suspended players, Shinrone got on top in the second half and pulled away in the closing ten minutes for a very convincing win.

It sent Clara hurrying to the dressing room for news of the Clodiagh Gaels v Kilcormac-Killoughey result and they were very happy that it kept their season alive.

In the other game, Tullamore continued their very good form as they topped the group with a 1-20 to 0-16 win over Lusmagh.

It means that Tullamore will now play Clara in the semi-final while Lusmagh meet Clodiagh Gaels in the other one.  The semi-finals will take place on the weekend of Novemer 6-7 while Shinrone and Kilcormac-Killoughey meet in the relegation play off.